Car guards – a help or hindrance? 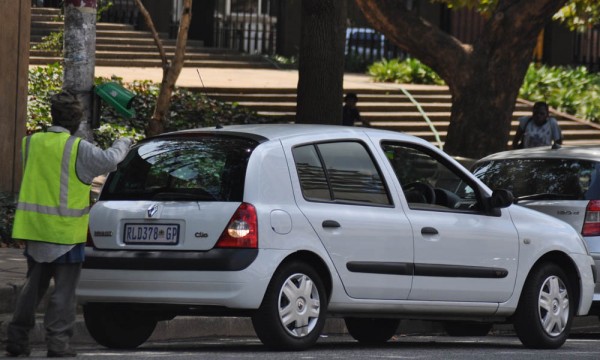 Informal car guards can be found on most streets guiding drivers into parking bays. Many do it to make a living but drivers question whether they really do guard their cars and whether they should be given money.

Many students park on Jorissen Street and streets close to Wits East Campus as an alternative to using campus parking. All that’s expected once they claim their car is spare change. If this spare change – anything from R2 to R5 – isn’t offered, some car guards become aggressive.

“They really bother and harass you for money,” says Preetha Sooknana who picks up her nephew who is studying civil engineering at Wits. She says if she remained in the car she didn’t think it was necessary to tip them, but will tip a guard R2 to R3.

Emilie Owen, a third year drama student, says she feels obligated to tip the car guard and usually gives him R2. A second year drama student who did not want to be named said the guard “pesters him for money” and “made it seem like he deserved money for being there” because he had witnessed an attempted theft of the student’s motorbike.

Kim Roberts, a third year physiotherapy student, hasn’t experienced any problems and usually tips the guard R3 as “R1 isn’t enough to buy anything”. She uses street parking when she comes to Main Campus even though she pays for Wits parking. She said Wits Medical School’s lack of parking was worse. “They shouldn’t sell parking if there isn’t any,” she added.

Students who use the parking on Jorissen Street are familiar with Godfrey. He’s been Jorissen’s informal car guard for 15 years and says he doesn’t get offended when people don’t offer him a tip. Dominic Peters, a car guard on Henry Street, says guards make about R150 to R250 a day and he appreciated at least R2 to R5 as a tip or even food.