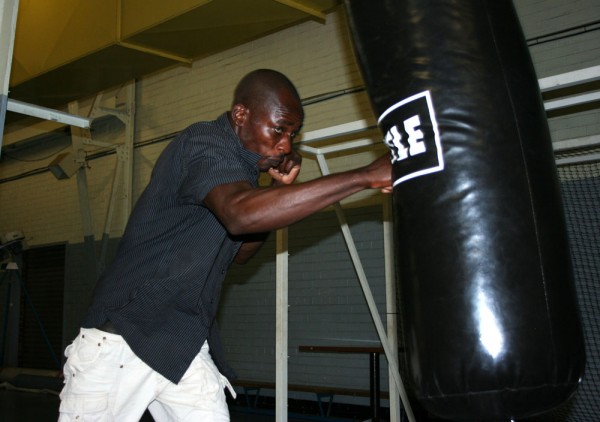 WITS boxing club welcomed a new coach into its stable three weeks ago and for the first time since its inception in 1998 he isn’t a Witsie.

Eric Manganyi returned to Johannesburg after working as assistant trainer to Lehlohonolo Ledwaba (former IBF super bantamweight champion) in Bloemfontein.  Although he is excited about passing on his boxing skills to Wits beginner and senior amateur boxers, he knows it will take time.

“I love boxing, it’s in my blood and veins,” he saiys.

Manganyi intends working with the boxers to develop their skills by giving them a good foundation of the basics. “My style is about knowing how to move, use your punches and defend. Knockouts are a bonus.”

He hopes that Wits will see positive changes and growth in the club.

Manganyi was encouraged to start amateur boxing after reading a story about Dingaan Thobela’s success in Bona magazine at the age of 14. At 23 he decided to turn professional but gym owner Rob MacLeod saw his potential as a trainer and his career as a professional assistant trainer began.

Mbongisi Dyantyi, former coach and member of the Wits Writing Centre, left the club last year to further his studies in America. Though the club’s senior boxers miss their ex-oach they are both excited and nervous to work with a new trainer.

“He’s used to working with professionals and sounds intense,” saiysVathiswa Nongogo, a Wits BA student who’s been boxing at the club for three years. She felt she might have to change her style a bit as “Eric seemed much lighter and faster on his bag workout”.

PhD chemistry student Siyanda Mthembu has been boxing at the club for five years and expects a training regiment similar to Dyantyi’s. He says he doesn’t “really understand Eric’s plan of action yet” but thinks it’s still too early to tell.

The club’s chairperson, Bakholise Mabuyane, says they were “keeping an open mind with the new coach as he surely would bring something new to the table”.