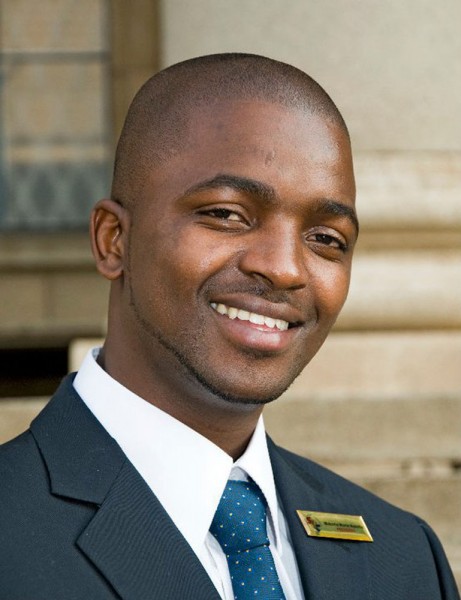 Wits SRC president Mukovhe Morris Masutha was honoured with an award at the academic dinner on March 25 for obtaining two distinctions in economic geography and city cultures III.

Despite his disadvantaged background Masitha has managed to achieve a lot in his four years in Johannesburg. He was elected spokesperson of the ANC Youth League in 2008, Sasco’s spokesperson and chairperson of Men’s Res in 2009, and Wits SRC president this year.

Born in Mapate village, Venda, and one of seven children. Masutha says he had lots of challenges growing up and during his first year at Wits in 2007. He walked to school  2km from his home barefooted. He says that poverty never impacted on his academic performance.

“I stayed outside campus in my first year; I had a low self esteem but gained my confidence when I stayed at Mens Res in my 2nd year.”

He laughs when he recalls being part of the 2007 strike against high school fees because he did not want to write his psychology test.

The strike made him realised how much fee increments negatively impacted on working-class students and this motivated his passion for politics.

According to Mashita students need to unite in addressing issues they face. He aims on fighting against financial exclusion which he calls ‘academic genocide’ on poor students.

“Education students have been treated unfairly and rejected for a long time, and I am going to fight this,” he adds.

Masutha is an inspiration to many students who are from disadvantage backgrounds.

“Our SRC president motivates me, I am from rural Kwa Zulu-Natal, and I feel left out in class because my English skills are not as up to date as others and I have a low self-esteem. I now believe the situation I am facing will pass and I will gain confidence like he did,” says Ntokozo Mchunu, 1st year LLB student.

Robert Maremela, 1st year BAed student says, “The SRC president struck me as a brave man, his commitment to fight against academic exclusion explains it.:

Maremela says financial exclusion negatively impacts on him as he travels from squatters of Honeydew to school because his financial aid package doesn’t cover residence and thinks the president should get all the support needed from students.

“This Masutha serves as an inspiration to many students and proves the stereotype that SRC members always do badly academically and takes up to five years to complete a three year degree, wrong.”