The set at the performance of “A Midsummer Night’s Dream” came crashing down in the middle of the play at the Wits Main Theatre on Tuesday night.

The preview performance was interrupted when a piece of the set – a tree made from corrugated iron – fell after an actor climbed onto it as part of the performance.

Lamar Bonhomme, the drama student who fell during the performance said that he was uninjured and the set has always been secure. 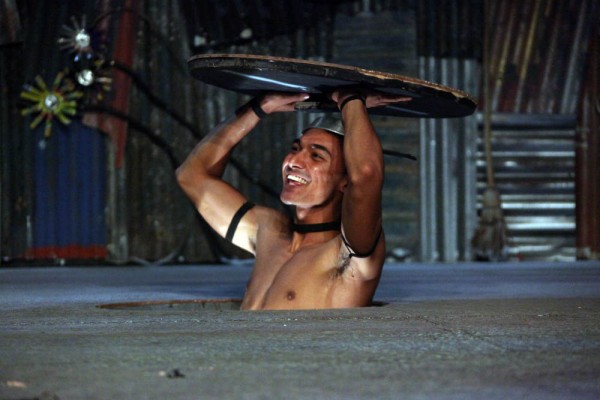 OH PUCK: Lamar Bonhomme plays Puck in the Wits production of A Midsummer Nights Dream. At the preview performance on Tuesday night he fell on stage when part of the set broke unexpectedly. Photo: Courtesy Ruphin Coudyzer

“Through all the rehearsals, the weights may have shifted, and I think I put too much weight on one side when I got into position.”

Bonhomme said that his performance has not been affected by the incident. “It made it [his acting] a bit better,” he joked.

“I was a little scared about the tree, but once we made sure everything was secure… it was fine.”

Greg Homann, the director of the play said that the set falling was unexpected and that all safety protocols were followed when the incident happened.

“I had been up and down the tree many times, and we’ve used it for the last week in the theatre, so there was no indication that it was unstable at all.”

He added that part of the incident could be seen as a learning opportunity for the students, in terms of safety and the unpredictability associated with theatre.

“The safety of the students is at the forefront of all of our planning,” said Ashraf Johaardien the general manager at the Wits Theatre. Johaardien said there was no way of knowing that this type of incident could have happened.

“It’s a complex show and things can go wrong. Fortunately nobody was hurt. We’ve identified the problem [and] very quickly corrected it,” he said.

Students were given a briefing on health and safety. The actual cause of the accident is still unknown, but is under review according to Johaardien.