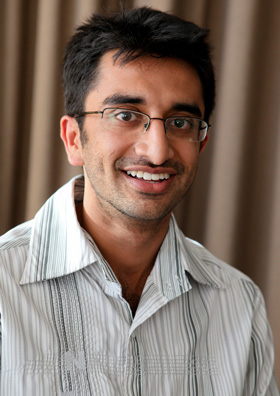 He broke the record for attaining the highest marks in the past three decades at the school of economic and business sciences and was awarded the University Chancellor’s Gold Medal.

The 21-year-old student thrives on coffee, and early mornings. He is an “active person” who juggles studying, community involvement and living alone with ease. He volunteers his time at Student Equity Management.  With so many obligations he claims that “despite loving social media I have no time to use it”.

Seedat attempted the competition the year before and was unsuccessful. Unperturbed he decided to give it his best shot and try again.

When asked what prompted him to enter the competition he jokingly  said the cash was a huge incentive, but  went on to say that on a more serious note the opportunity of writing an academic research paper and the chance to meet interesting people was what made him enter.

Seedat’s essay on suggested changes to South Africa’s monetary policy framework saw him shortlisted to the top 10, who spent a week in Cape Town being interviewed extensively.

The Old Mutual and Nedbank Budget Speech Competition is an annual initiative which seeks to nurture and invest in the next generation of economists, decision makers and thinkers. Each year applicants are invited to submit an essay on a specific topic related to the economy. Generous cash prizes are awarded for the three top essays in the postgraduate and undergraduate categories.

Seedat jets off to the UK later this year to further his studies, after he won the Rhodes scholarship to the University of Oxford. He is planning to do his doctorate in financial economics.