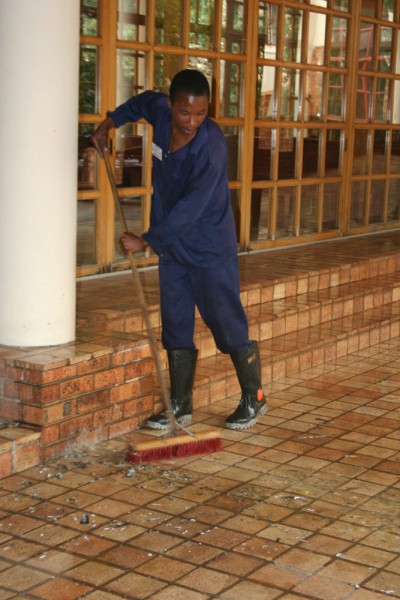 AFTER 2 years Barnato students are still complaining about pigeons breeding in the residence roof.

Branato’s roof makes a perfect nesting site and apparently the floor by the entrance area is constantly stained with pigeons’ droppings. Residents say the birds are dirty and annoying.

On Monday March 14, Thato Kolobe, a Barnato resident, said she saw a dead pigeon near the entrance. By the following morning the dead bird had not yet been removed.

Lindokhule Mthombeni, another resident at Barnato, claims the cleaning team waste a lot of water every morning washing the stains away, but by lunch time the floor is dirty all over again and it stinks. She would rather not have the pigeons around but she doesn’t believe she has a choice.

Barnato’s house committee is not planning on solving the problem.  Chairperson Kwaku Adzatia said “it’s a wild life issue” and the pigeons can’t be blamed, so “people must try and be careful”.

Adzatia has been there since 2009 and, according to him, the accommodation office has tried to come up with solutions but nothing has worked because the birds just moved to another part of the residence.

According to Robert Sharman, head of residence life, there has been a recent proposal involving the installation of fine netting under the trusses upon which the pigeons roost at night. This should prevent the birds from nesting at the site.

Dr Craig Symes, whose research at Wits school of animal, plant and environmental sciences covers ornithological topics, said pigeons on campus don’t pose a health hazard. However, “in areas where faeces may accumulate beneath roosts it may become unhygienic”.

According to Miriam Buthelezi, team leader of Caravone Cleaning Services, the company in charge of cleaning the residence, the stained floor is hose washed four times a week.

Gina Arena, a masters student at Wits avian physiological ecology lab, said pigeons might carry diseases but not at a level that should worry students.

Symes said screens can be put around buildings to restrict pigeons’ access and architects can be taught how to design buildings unfriendly to birds.