Strike leaves a stink on campus 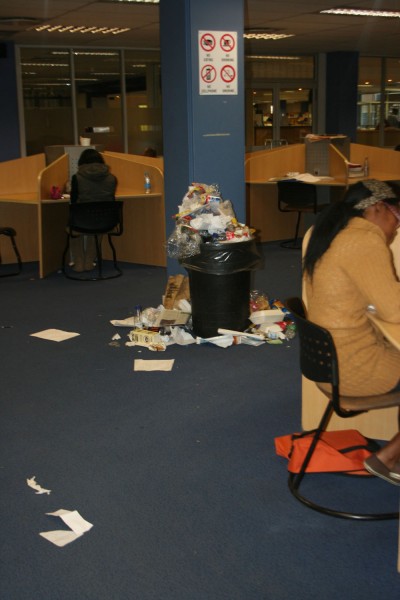 The Wartenweiler library is a mess while the cleaners strike.

Campus resembles one big dustbin as residences, toilets, libraries and lecture halls have been left dirty after cleaners began their strike on Monday.

Wits Solidarity Committee member, Mbuyiseni Ndlozi, gave a message of support to cleaners outside Senate House on Monday. “Campus must stink, so that people will know the importance of cleaners; as long as campus is clean, people won’t know how important this service is.”

He said that living comfortably in clean spaces while cleaners are exploited was an injustice, as they are not remunerated properly.

Vuvuzela found dirty toilets and overflowing dustbins all around campus.

3rd year BCom student Mfanelo Mabasa usually  finds the 24-hour section at the Wartenweiler library the only conducive environment to study in, but said the library is currently “unbearable for studying”. He is, however, in favour of the strike as he believes cleaners deserve more pay.

A statement released by Vice-chancellor Professor Loyiso Nongxa said that “the cleaning companies contracted to Wits are to appoint temporary staff to clean both private and public areas at the institution”. 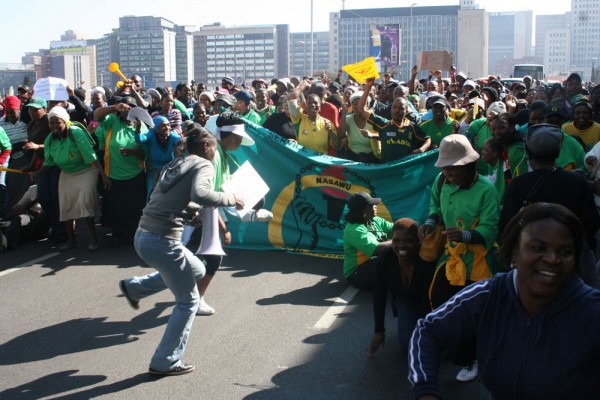 Wits lecturer in the politics department, Dr SP Lekgoathi, has a “please don’t clean this office. No to scab labour” poster outside his office door.

Lekgoathi said: “The place should be dirty so that the service providers can realise we can’t do without cleaners.”  He also said that, as academics, it is fair to support the cleaners.

Simon Skosana, a 1st year BSc mining engineering student studying in Wartenweiler library said he was disturbed by the dirt. “I don’t have a choice because I want to study.”

Another 3rd year student, Gqamile Dladla, said: “Wits should respond and workers should come back, the bathrooms are disgusting”.

These Witsies said the strike had made them realise the cleaners’ worth. 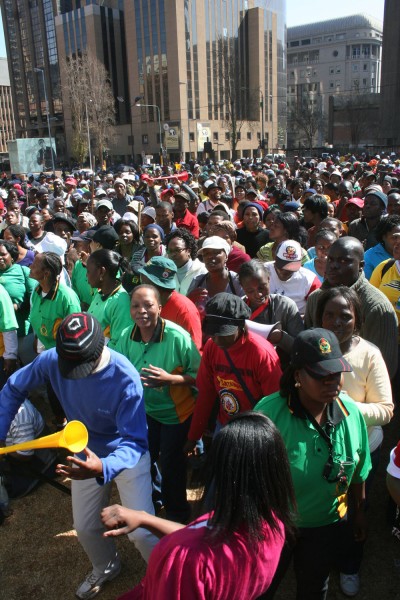 The strike began on Monday when unions, including Wits contract cleaners, marched to the library lawns in Johannesburg. The unions want the salaries of workers earning less than R2 400 a month increased to R4200 a month. Other demands include a yearly 13th cheque and an eight-hour working shift.

General secretary of the National Services and Allied Workers Union, Sam Mbou, said no official offer has been made by the employers.

Wiseman Dinwa, Hotelicca deputy general secretary, said the strike will continue until an agreement with the employers is made. 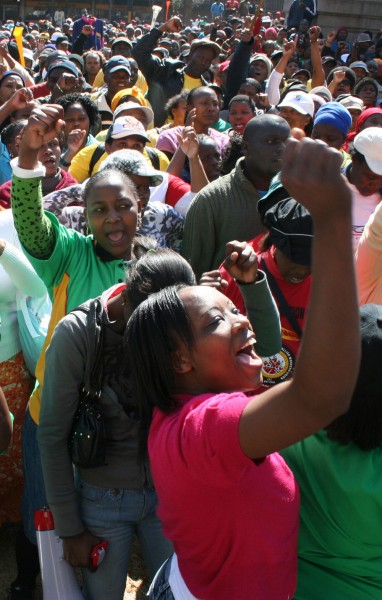