Herbie with a twist- the coolest bug on campus

ON the road next to the South West Engineering building, a small car is getting curious glances and causing people to stop in their tracks.

The Volkswagen Beetle which has been converted into a limousine is the property of the ya-Nakamhelas.

Elanza ya-Nakamhela is programme director of the International Human Rights Exchange Programme in the school of social sciences at Wits, but it is her husband Udi ya-Nakamhela, a freelance journalist, to whom this cool car belongs.

“I’ve always wanted a Beetle, since I was 16 years old,” says Udi. “I saw a picture of this specific Beetle in a magazine.”

The limo belonged to a company in Randburg that restored Beetles.

“I was bugging the owner to sell it to me and when the company closed down he called me up and asked me if I wanted to buy it,” Udi says.

Beetles have always been the car for Udi. “I have a lime green Beetle convertible at home and this is the fifth Beetle I’ve owned.”

However, this Beetle is not just all looks and no spunk. “It goes up to 140km on the freeway with five people in the car,” Udi says.

“Obviously this isn’t a good thing to do, but I look after the machine very well.”

Udi has had some good and bad memories in his Beetle but the worst one was when he was driving a wedding party to their venue.

“I had the bride, the bridesmaids and the pastor in the car and when we turned onto the estate where the wedding was taking place, another car drove into us. I kept thinking the bride or the pastor could have been seriously injured and this is the memory that stands out the most.

“The best memory I haven’t had yet,” he jokes.

His wife Elanza was not too happy when he first bought the Beetle according to Udi but she now drives it to Wits while her car is in for repairs.

“I originally bought the Beetle to be a weekend car but now we drive it daily,” says Udi.

“Many people have told me to make it into a business for matric farewells and weddings but I bought the car for myself. It’s my toy and my baby.” 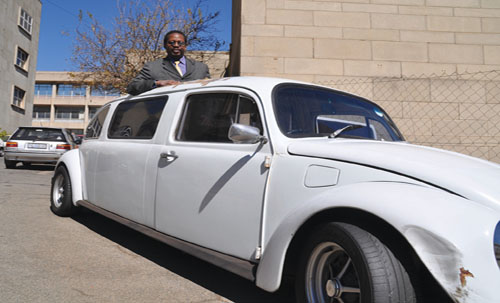