Wits needs to wisen up in its water use on campus

WITS cites its reasons for not being a forerunner in the practice of water conservation principles on the lack of automated irrigation systems.

With South Africa in danger of running out of water by 2030, Wits needs to make some changes in its use of water in the irrigation of plants, sports fields and wash-up of sports facilities.

But, steps will be taken to ensure that overwatering of plants and landscape on Wits campuses will not take place again after Vuvuzela informed the Wits grounds facilities manager of property and infrastructure, Andries Norval, about separate incidents of overwatering at JCE.

“It’s been switched on since early this morning,” said a JCE security guard at 1pm when asked about the muddy puddles and overspray at the exit to Wits medical school. Around the Highfield residences the sprinkler system had also been spraying largely onto pavements.

Norval says he will ensure that overwatering “does not happen again at the sites reported (and other sites). I will also arrange to have the settings of the sprinkler system checked to ensure there is no unnecessary overspray onto paved areas”.

Highfield Reith Hall’s housekeeper was unable to find any Sonke Plantscapers’ workers, the company managing Wits’s grounds, to ask them about the sprinklers and why water was left gushing for hours and onto pavements.

Wits also waters parts of the main campus at mid day and sports fields are watered for the full day during the week. Tennis courts are also hosed down during the day instead of scrubbed with a broom. This is the time of day that water conservation teachings state not to.

“Ideally watering should be done early in the mornings and late in the evenings, but unless automated irrigation systems are installed, this is not possible at Wits. There are strategic plans to do exactly this in future and a start has been made this year to install such systems,” says Norval.

Ryan Hill, Sonke Plantscapers’ manager, says he “also noticed the watering on JCE was on a little too long on Monday”. “We normally water in the mornings and then switch off at 1pm, when we come back from lunch,” he says.

Water waste and management is a global concern. The Department of Water Affairs and Forestry says South Africa’s concern is that fresh water resources could be used up within the next 20 to 30 years if water conservation and water demand management do not become more than just municipal priority. 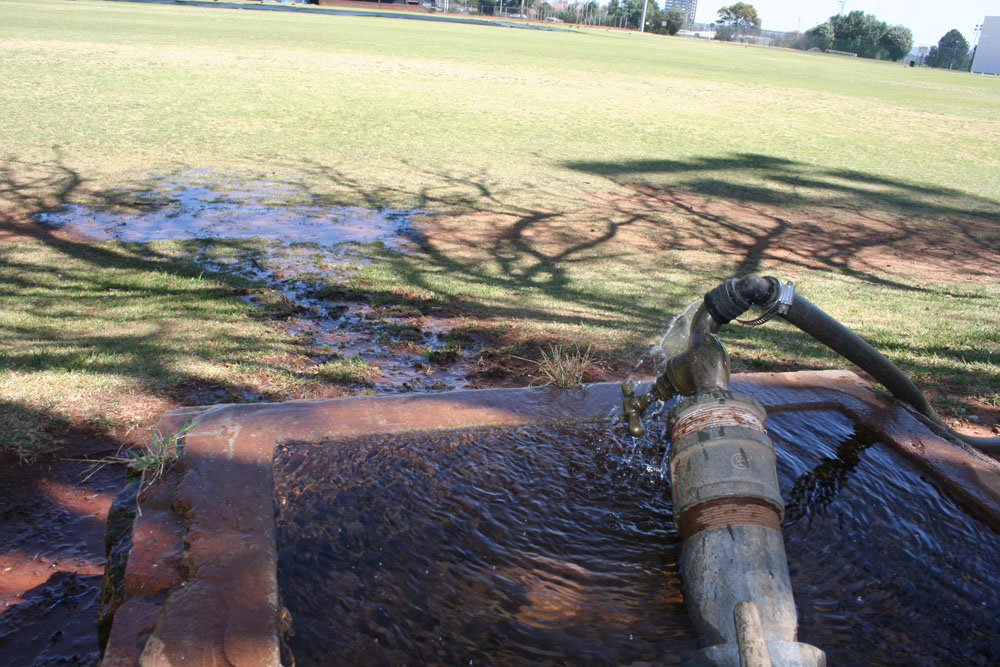 SOAK UP: A leaking tap, left on for hours on the cricket field resulting in a muddy puddle at Wits,East Campus