Hayani is where the art is 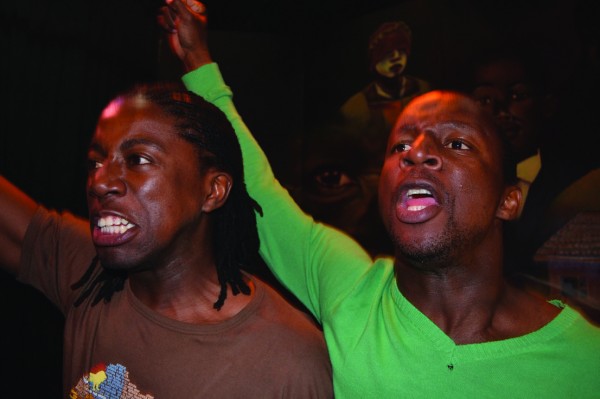 No matter how complex one’s upbringing and adult life are, Hayani’s characters find that home is where the heart rests.
The staging of Hayani (meaning home in Tshivenda) looks at the true tales of two South African men – revealing their honest, multifaceted and emotional journey towards understanding themselves through the transitional years of South Africa’s democracy.
The play is directed and collaborated by Warren Nebe, senior lecturer in the Wits school of arts. His directing credits include the Drama for Life festival, Born in the RSA and Crocodile.
Nat Ramabulana and Atandwa Kani play their personal narratives while slipping in and out of the characters of their parents, siblings, neighbours and friends – they do so swiftly and effortlessly. They don’t act – they become the characters and pull the audie

nce into the different times and places – making them forget that they’re watching a play.
Ramabulana is an award-winning actor who graduated with a degree in dramatic art in 2008. He has acted in film, television and theatre productions. These include Jerusalema, The Bang Bang Club and M-Net soapie The Wild.
Kani is an actor with an honours degree in theatrical performance. He made his television debut on a show in the United States and his international stage debut in The Tempest alongside his father John Kani, an industry veteran.
Hayani is an accomplished and entertaining play; the audience laughed through their tribulations and empathised with them through their hardships.
With no costume changes and minimal use of props, the actors’ storytelling proves to be even more compelling.
Every move is done with purpose. Also, their excellent use of performance space makes the play more engaging.
The production is a nostalgic experience because even if you don’t relate to Ramabulana and Kani’s tales, you’ll know of someone who might.
Matthew MacFarlane adds to the emotion of the play with live acoustic sounds.  isiXhosa, Tshivenda and English are the languages spoken in the play.
It is beautiful, intelligent, sincere and ugly all wrapped up in one.
The play is proof that in a time when we know more about the Kardashians than ourselves, the culture of oral storytelling is still alive.
The play is on at the Market Theatre Laboratory until tomorrow at 8pm. Tickets cost R80 and R50 for students and pensioners.

Tickets are sold at the door or   www.computicket.com