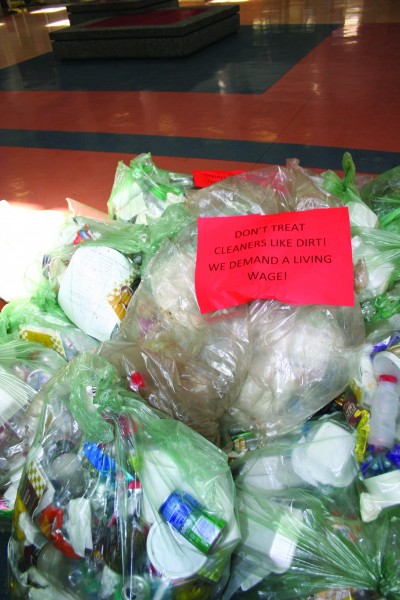 THREE students have been suspended after using radical methods to create awareness around the cleaners’ strike.

“The agenda of this whole movement is to hinder the jobs of scab workers,” said Mbuyiseni Ndlozi, chairperson of the Postgraduate Council.

Ndlozi is one of the students who was suspended, after he was identified for trashing the Senate House Concourse a few weeks ago.

The students are opposing the employment of scabs, or temporary, workers. They trashed the New Commerce Building on Friday morning.

Vice chancellor Professor Loyiso Nongxa said: “Wits is committed to doing its level best to ensure that people’s rights are protected.
“We should never allow or tolerate a situation where one group tramples on the rights of others in pursuit of its own rights and privileges.”

The students are opposing the employment of scabs, or temporary, workers.
They trashed the New Commerce Building last Friday morning.

On Monday, students demonstrated in front of the Great Hall, holding mops and dressed in workers’ uniforms. They took bags of rubbish and put them in the Senate House Concourse, encouraging students to leave their litter lying around.

“If you have litter, dump it in corridors,” said Naadira Munshi. The sociology honours student said students aren’t aware of the strike, which is in its fourth week.

“An entire community of workers’ aren’t present on campus,” she said. “We’re trying to remind people that Supercare and Caravone aren’t here.”

Munshi said the university is attempting to divert attention away from the strike by suspending students. “By charging three leaders, people become wary of actively showing support.”

Simphiwe Buthelezi, a 1st year engineering student, said he agrees with their methods. “People are not paying attention [to the strike] because of scab workers.”

“People are [being] cleaner than ever, because they know cleaners are not around,” he said.

“I think it would be bad if they trashed Senate House- this is a welcoming centre,” said Lucky Mthimunye, a 1st year student. “It would make the point stronger, but management would be upset.”

Other related incidences occurred at Esselen Residence, where kitchens were covered in rubbish and last week the first and second floors of the Matrix were flooded after taps in the bathroom were left running .

Workers are expected to return to work on Monday, with negotiations still in place.