Voice of Wits celebrates a year on the airwaves 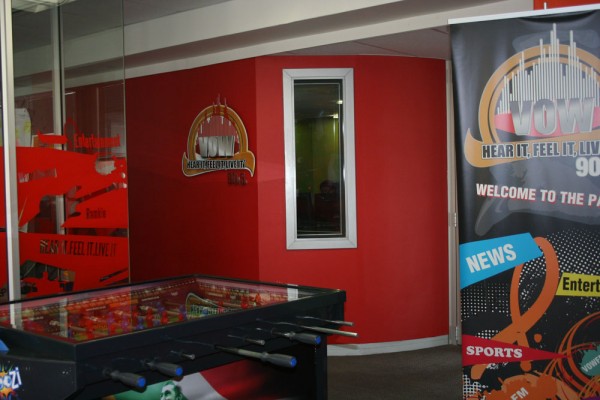 Voice of Wits (VoW FM) celebrated its first birthday last week, marking a year since the station reopened its doors after shutting down in 2008.
The station re-launched under the slogan “Hear it. Feel it. Live it.”, offering music and programming presented by students for students.
With a state-of-the-art studio in Braamfontein, the days of broadcasting out of a dusty office in The Matrix are long gone. The studio cost about R3-million to build and boasts brand new equipment which station manager Mike Smurthwaite says is “full-on digital and industry compliant”.
Smurthwaite says the station has taken great strides over the past year.
“We have achieved what we set out to in terms of re-establishing a brand that had been lost. We have shown the Wits community that there is a platform to speak on, to be entertained and informed,” he told Vuvuzela.
The VoW team consists of 60 volunteers and broadcasts 24 hours a day, with a news and sports team dedicated to producing Wits-orientated news bulletins three times a day.

The station recently signed a partnership with BBC World Service which Smurthwaite says has enabled local listeners easy access to international news as well. One of the biggest gripes about the station from staff and students alike is its frequency. It only reaches a radius of about 3km, limiting broadcasting to Braamfontein, Newtown, the CBD and Parktown.

“This has frustrated us the most,” said Smurthwaite, “but we are looking to grow the reach and are applying to have it extended.”
Despite its small reach, the station has managed to attract as many as 11 000 listeners in one month, according to a RAMS report.

“VoW FM has grown tremendously, in fact it has overgrown,” said music manager and DJ, Deza.
“It has done so much better than I would have expected. The infrastructure is top notch and we are above standard when it comes to campus radio stations,” he added.

Zamantunga Khumalo, host of popular talk show The Edge, says the station is also playing a vital role in developing young talent.
“We’re getting hands-on experience and using the best industry equipment that we wouldn’t have had an opportunity to experience anywhere else.”