Two-year-old Romy just graduated and is now a student at Wits University. 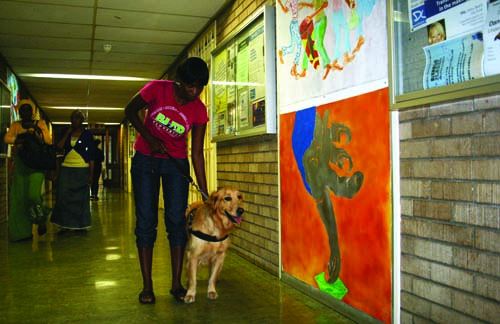 For the next three weeks she will be training in and around Wits, learning where the different buildings are, how the lifts, turnstiles and bus circuits work and how to settle in her new environment

“During class she sleeps until the lecture ends and only gets distracted when people pat and talk with her. I trust her a lot, she never lets me bump into things,” says Sisanda Msekele, a 3rd year BA psychology student, of Romy.

Romy is a golden retriever and Msekele had to wait a year before being notified her application for a guide dog was successful.

She says the last two years, when she used a cane to navigate her way around Wits, were much more difficult.

“The students are sometimes inconsiderate and stand in your way and it was easy to get lost. With the dog it’s way better and more convenient. They just remember things and have an idea of where they are going.”

Msekele says once she received Romy, she only had to pay R5 for her and R100 for her environment training. “After that the dog becomes your responsibility. You have to make sure it’s fed, goes to the vet. You have to put it on the same routine and treat it like a baby.”

While they are both still adjusting to each other, they are also adjusting to others on campus. Workers at convocation dining hall did at first question Msekele about bringing Romy into the building.

“At first they didn’t let Romy in but the head of the Disability Unit addressed them and now I don’t have any problems.”

According to the regulations governing general hygiene requirements for food premises, a guide dog may be permitted in the sales or serving area of the food premises.

Guide dogs are selected, after they graduate from guide dog school, based on their character and the applicants’ living environment and whether they are suited to each other.