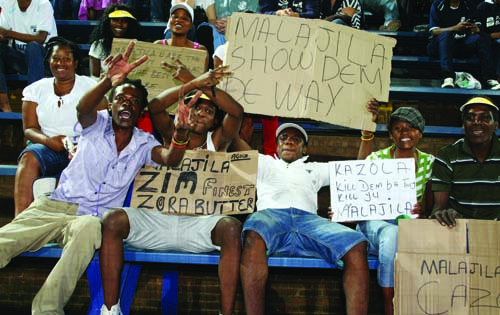 Bidvest Wits kick started their second half of the Absa premiership with a disappointing nil-nil draw against Maritzburg United at the Bidvest Stadium on Wednesday night.

Both teams displayed rather below par football after being out of league action for two months.

The opening 45 minutes of the match were characterised by misplaced passing and poor decision making from players in which both teams lacked precision and creativity in attack.

A clearly noticeable absentee in the Wits starting line-up was former captain Sifiso Myeni, who joined Orlando Pirates in the January transfer window, on a three year deal.

The Clever Boys would have certainly missed Myeni’s trickery and creativity, which was always a handful for oppositions, because even with the home ground advantage they were rather slow to get out of the starting block. Trusted defender, Sipho Mngomezulu, made his debut as team captain.

The first real attempt at goal came 30 minutes into the match from a Wits free kick which Masibusane Zongo ballooned over the crossbar from 25 yards.

In stoppage time at the end of the first half Wits forward Sifiso Vilakazi had his potent shot well saved by keeper Shuaib Walters, after doing brilliantly to create shooting space for himself around the congested Maritzburg United penalty area.

All hope was not lost when the teams went into the half time break with the score deadlocked at 0-0, and De Sa must have restored belief in his players because they came back for the second half of the match guns blazing and more purposeful in attack.

Five minutes into the half, Champman fancied an opportunity to put his side into the lead but he saw his shot fly inches over the crossbar.

There were plentiful chances created by both sides in the second half with United’s Byrone Hendricks putting his header wide from a Kurt Lentjies cross and Walters producing the best save of the game by diving to deny Zongo from a superbly struck 30-yard shot.

The game’s pace slowed down at the latter stage of the second half and the teams took a point each at the end of the night.

Wits lies ninth on the premiership log with 24 points after sixteen games and hope to improve their standing when they face Santos tomorrow night.