Trashed, charged, heard but not yet judged

The three students who “trashed” Senate House concourse last year are still waiting for a verdict on their hearing. 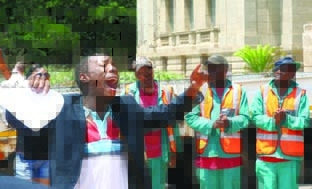 The disciplinary inquiry took place on Wednesday 15 at the Wits legal office.

Mbuyiseni Ndlozi, James Pendlebury and Komnas Poriazis, from the Wits Workers’ Solidarity Committee (WWSC), argued the littering action was undertaken in solidarity with the strike by outsourced workers on campus in August last year.

The hearing was chaired by Professor Stephen Tuson, who will solely judge the case, and the outcome is expected in two weeks.

“The hearing and the way in which it was conducted went well,” said Ndlozi.

When asked if he was confident about the outcome he said he didn’t know what the verdict would be but was proud of their actions.

“We believe in what we did,” Ndlozi added.

Pendlebury and Poriazis also felt they had a fair hearing.

Yusuf Peer, SRC policy, constitution and legal affairs portfolio holder, said: “As the SRC we felt that the entire process was flawed from the start.”

He added they could not find clear documents that show where the boundaries are for lawful or unlawful protest at Wits.

Acting SRC president, Tebogo Thothela, was one of the witnesses at the hearing.

The council organised a rally the day before the hearing encouraging students, lecturers and workers to sign a petition requesting the charges to be dropped.

The request from the students for the hearing to be public was also denied.

South African Students’ Congress (SASCO) and Progressive Youth Alliance (PYA) members showed up at the hearing to show their support for the students.

Dineo Sitole from the PYA said it was  shocking that management allowed the charges to be investigated so soon, since they were only sanctioned late last year.

“We should be looking at the workers and the working environment, as opposed to checking on students,” she added.