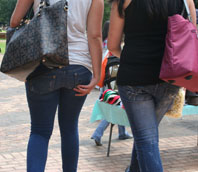 med girls don’t just make the “rockin’ world go round” in a Queen song but recent studies have health experts singing its fatty praises. Oxford University scientists have learned that storing fat in your bottom, rather than stomach, cuts levels of “bad” cholesterol and raises the “good” cholesterol that protects against hardening of the arteries. The benefits of having an ample derriere extend even to cutting the risk of diabetes and helping with weight loss in other parts of the body. Those blessed with a bigger bottom might want to shake off the negative stigma that goes with it and hold off on burning off too much of this healthier form of fat. It has been discovered that might not be a good idea. Because the fat around one’s bottom breaks down slower than belly fat it produces fewer chemicals linked to diabetes, heart disease and obesity. But the study – published in the International Journal of Obesity – does not condone obesity in any way. It warns against being overweight and encourages people who have an increased waist size to adopt a healthier lifestyle. “Big is not better, and fat is not the new phat,” said a 4th year law student who did not wish to be named.