Wings and a prayer

The former Witsie conducted a three-hour workshop for the cast of Paul Grootboom and Presley Chweneyagae’s Relativity – Township Stories.

The workshop was part of the company’s preparations for the Setkani/Encounter Festival in Brno, Czech Republic, in April. The play, directed by Wits School of Arts drama lecturer Tshepo Mamatu, was chosen to represent Africa in the international event.

Khumalo, who did her honours in music history at the University, began with the customary breathing exercises and vocal warm-ups. 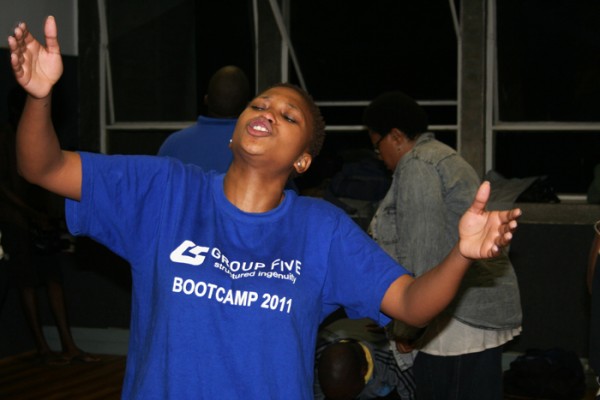 FEELING THE SPIRIT: Zola Nombona sings a gospel song during the rehearsal of Relativity - Township stories at the Wits School of Arts on March 1.

When the aspiring actors began to sing one of the isiXhosa gospel songs from the play, she stopped them abruptly and encouraged them to sing with purpose.

Khumalo helped the actors to tap into painful experiences in their own lives so that they could play their roles effectively.

One member of the company hugged and rocked herself, while another discreetly dabbed away her tears. Another young woman burped repeatedly in the spirit. Others wept openly. A burly young man cried out, his arms reaching towards the heavens. Another wailed and was comforted by his colleagues.

“That is the life of a performer. Your soul is exposed all the time,” Khumalo said.

She urged them to remember the energy they had felt in that moment and use it to inspire their performances in a play which cast member Lerato Matolodi had earlier described as “an emotional ride” with “a rough opening scene”.

Khumalo reminded the group of the importance of spirituality in the life of a performer.

“There’s nothing else to keep you steadfast and centred. No amount of drugs, no amount of alcohol will do it…Remember that all the time.”

“She is a goddess. She is so beautiful. We are being coached by a legend. It’s a great privilege.”