A double-bill of Chekhov shorts – two one-act farces with a “sit-com type of vibe” – is currently being presented by the School of Arts, School of Drama and the Wits Theatre.

After more than 100 years, The Bear and A Marriage Proposal are still applicable to modern South Africa, says Makhaola Ndebele, director of the short plays. As it was then, middle class society is still concerned with “non-issues” in their lives.

“I’m very interested in representational work, situational comedy…the sit-com type of vibe. It resonates with me so much because he [Anton Chekhov] was a Russian from the 1800s, and I just thought, ‘Wow, this is so relevant’.”

Another thing that attracted Ndebele to the work of Chekhov was his way of observing and representing the middle class and land owners.

A Marriage Proposal, Ndebele explains, is about a man who wants to propose to a young woman, but keeps getting distracted. They end up arguing about mundane issues like, who owns a piece of land and who has the better dog.

“I think in our society today there are a lot of people who get concerned with these so-called ‘non-issues’, and miss the bigger picture.”

“It was a humbling experience…very professional and very exciting to be part of such as huge project.”

He recently decided to study for a masters in dramatic arts, while lecturing at Wits. “Learning is an on-going thing… after so many years in the industry, I decided I wanted to teach and doing a masters kind of enables me to investigate and research new areas of performance that I have not previously done.” 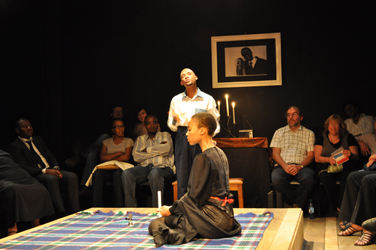 Luke, played by Michael Mazibuko, begs Ms Popova (Gaosi Raditholo) to stop mourning the death of her husband and step outside. (The Bear) 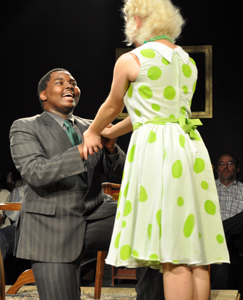 Lomov, portrayed by Gamelihle Bovana, proposes to Natasha, played by Emma Tollman, in A Marriage Proposal.