Ahead of the Back to the City Festival on Freedom Day (27 April) Vuvuzela caught up with the hip-hop group 3rd Wave, who are set to perform at the festival.

We asked about hip-hop and learned more about moon walking androids, Dionysian fantasies and some of their achievements. 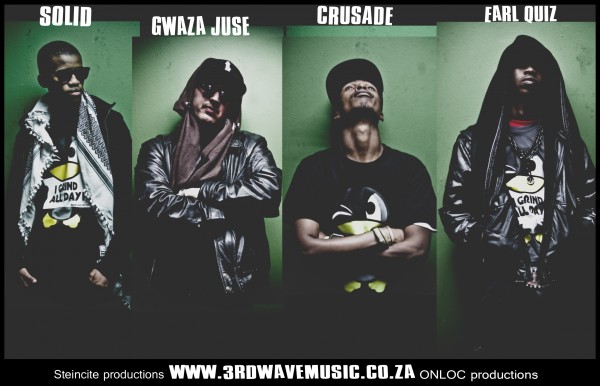 1) Is this your first time performing at the Back to the City Festival?

Solid: It’s our second time rocking at Back to the City. We’re honoured to be on that grand stage with SA’s top hip-hop monsters and to be selected again means we’re doing something right. After all we did receive a good review in Hype Magazine for last year’s performance at the show. We’ll be making sure we rock every year.

2) What is the need for a festival like this in South Africa today?

Crusade: It commemorates the first democratic national election. In relation to the festival, [it] breaks down divisions in many ways. The festival parallels acts from both the mainstream and indie, provides a platform for established and upcoming artistes to share their voices with the masses, abandons the notion of segregation among culture, religion, regional dialect and language. We’re all speaking the same language. The idea of this festival for this specific day has so many layers.

3) Describe the type of hip-hop you do.

Crusade: The style is very True School Hip Hop. Though each member has their own style, the synergy allows for the collaborative effort from each individual to form a sound that makes it unique as to how 3rd Wave does. It is a balance of nostalgic sound of sample based funk, winging in the balance with the future sound of synths and super charged, witty and well thought lyrics that embody the craft into something timeless.

4) Tell us about your latest single, Come On.

Gwaza Juse: Come On is a space travel song. A trip on a train that through the star systems conjuring colourful visions of bygone eras of South African music as a gravitational warping of colourful light. It’s a light speed Dionysian fantasy (quote me on that mtshana). It culminates in the celebration of the art form that brings together them all, namely, hip-hop. It returns the spirit of Kofifi transfigured into a gravity defying expansion that leaves orbit and frees itself from the pull of dark matter, generating endless space like the force of dark energy. It is Einstein’s cosmological constant if it was imagined in a dream featuring the spirit of the great Todd Matshikiza as a moon walking android with a nuclear accordion.

5) What is the biggest misconception about hip hop in South Africa?

Quiz: The biggest misconception about hip-hop in South Africa is that hip-hop is a musical genre, hip-hop is not a musical genre, it’s a culture. Hip-hop is not what at you see on MTV and hear on radio, hip-hop is what you see around you, if you pretend there is no such thing as rap music and absorb what is around you, the smells, energy the environment, that’s hip-hop. People have mistaken rap music and hip-hop that’s where the confusion started. But 3rd Wave is here though, to claim all that back, which is why festivals like Back to the City are important.