A word from the Workers

They help to run our university, but they are not as well paid or as well known as the members of Wits management. In celebration of Workers Day, Vuvuzela decided to introduce you to some workers employed by Wits contractors. Vuvuzela was unable to get comments from any of the women workers who cited domestic commitments at home or fear of losing their jobs. 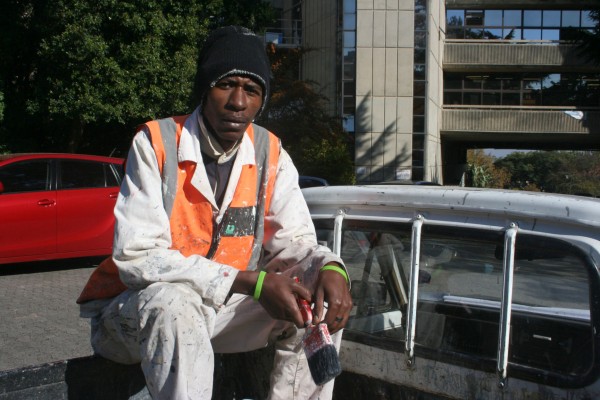 Sibanyoni is a painter with one of the contractors on campus. He has been a painter for one year and three months. He used to be a street performer, juggling sticks in places like Eastgate Mall. He explains why he changed professions.

“Sometimes when I was performing at the malls, security chased me away. I was also short of money to buy food sometimes. I miss the work I was doing, because I wanted to take it to another level. I dreamt of doing big shows and teaching children. What I like about painting is that when the room is dirty, you come and fix it and it looks nice.” 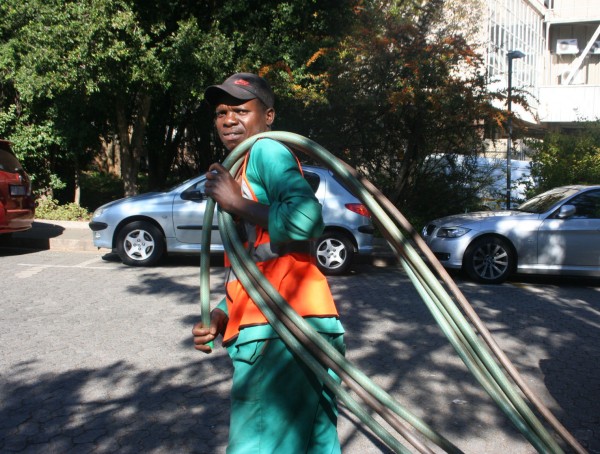 Victor Maluleke passed Grade 10 in 2004 but was unemployed until he found work as a gardener with a landscaping company which is contracted to Wits.

“I was just sitting at home. My younger brother and my younger sister were looking at me. I don’t have a parent now. I started [working for the landscaping company] in 2007, 13 January. I am looking for a better job. There is no money to buy some clothes and we can’t pay lobola. It’s too little. I have a girlfriend and two children and I want to get married. Some people who are older than me, 28, they are married.” 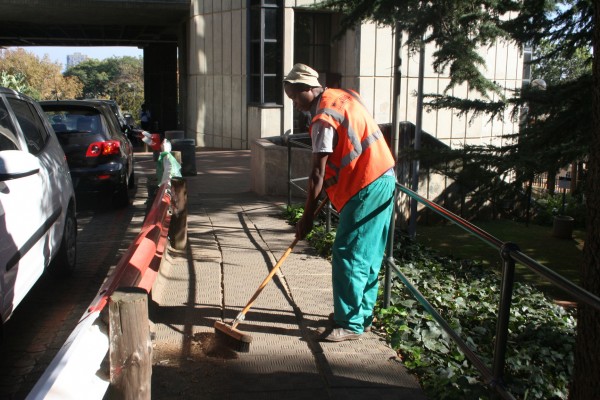 Sello Malatsi works as a landscaper for a Wits contractor. Vuvuzela spoke to him while he was sweeping leaves outside Sunnyside. It is his second year on the job.

“I used to be a packer at Pick’n’Pay, but it was temporary. What I do [now] is simple, easy. I enjoy my work, but I’m not getting paid well. My mother passed away. She left us three – me, my brother, and my sister. And also I’ve got a child, a 6-year-old boy. And my girlfriend also stays with me. She doesn’t work. It’s difficult for me. Eish, it’s very hard. I’m trying my best.” 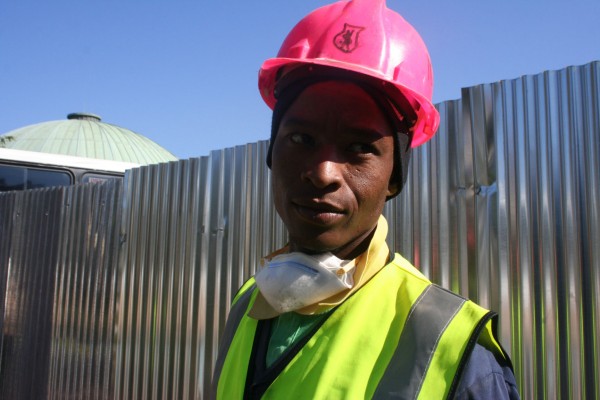 Mothupi works as a general worker for a construction company working on Wits Main Campus. He started work three months ago.

“Before, I worked underground in a big coal mine in Witbank. I left my job in 2009. I was retrenched because we finished the coal underground. In 2010 and 2011, I was at home in Ficksburg. I was going to a golf course. I carried bags for the guys who played golf, Monday, Wednesday, Friday, Saturday and Sunday. For nine holes I got R50. For 18 holes I got R100. I was feeling sad, because I had a lot of problems. I used to say ‘One day I’ll be like them.’ I’ve got that dream. I’ve got that dream to pick myself up and live just like others. I didn’t feel angry. That’s the way life is. I would say ‘Maybe next time I’ll get what I want.’ ”

“I don’t want to be a general worker forever. I want to be an operator, operating a front loader. That’s what I love. You get a lot of money as an operator. As a general worker, you get small money and I can’t solve all my problems. I’ve got a family and a lot of nephews. My brother, mother and father are not working. If I get money, I’ll go to a school for machine operating. I need R2500 for the operating course. I don’t have a chance to budget that money. My nephew is already going to school, so he needs something.” 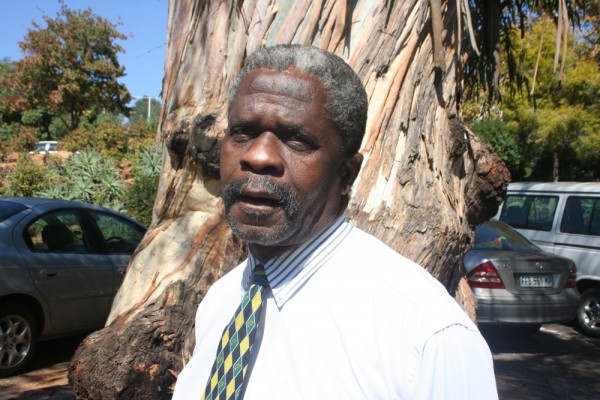 Zac Tshangela is a security guard at Men’s Res. He has been in this field for four years.

“Before that, I was working for an insurance company. I did short-term underwriting. The company that I was working for closed down. You knock on all doors; no work, no work. Seeing that I am responsible, looking after my children at school, instead of sitting down I decided to be seen at least to be doing something. I’ve got four children and two are still living at home.”

“My interactions with students are very, very good. I am more than happy with the students. Except here and there. The problems are minor. They’ve got to listen to the rules and regulations. Signing in and out is a problem, especially when they bring visitors. To my dismay, some of them tend ‘not to know’ the rules. They are still children. They pretend not to know. They all say they forget their cards when they go out. They can’t all forget their cards! You’ve got to be firm but considerate.” 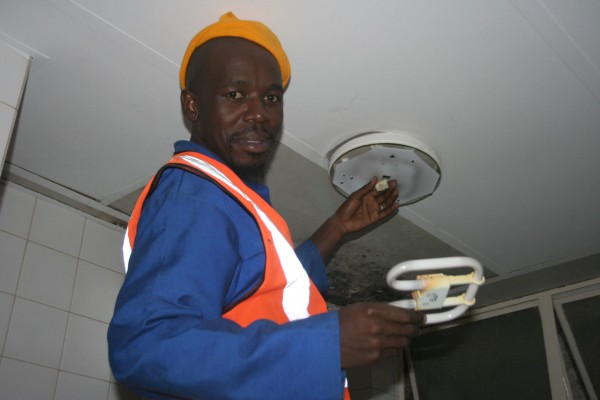 Wellington Ganya is an electrician and has been with his current employer, a Wits contractor, since 2008. Vuvuzela talked to him while he was fixing lights in the men’s staff toilet in Umthombo Building.

“What I don’t like about my job is when you are working at construction sites, grinding and chasing the walls to put the conduit which has the electrical wires. It’s bad for our lungs. You get the dust, even if you use a dust mask. The dust is dangerous. I was working with my friend Mdu from Mozambique. We worked at Hyde Park for three years, doing ceiling installation, which had fiberglass. He suffered with lungs. They say he got lung cancer. He probably died. They call it electrical construction.”

“What I like about being an electrician is that it combines guys with different cultures, like Mozambique, Zimbabwe, Malawi. You are developing your mind. You create a friendship. You know that even though he is coming from somewhere else, he is your brother.” 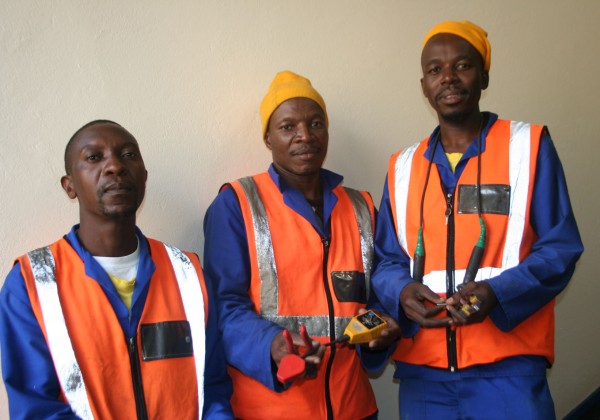 “Working with electricity, you need to be calm. That’s why you need to make friends at your workplace. Because you are working with a dangerous thing, power. You need to leave your frustrations at home.” 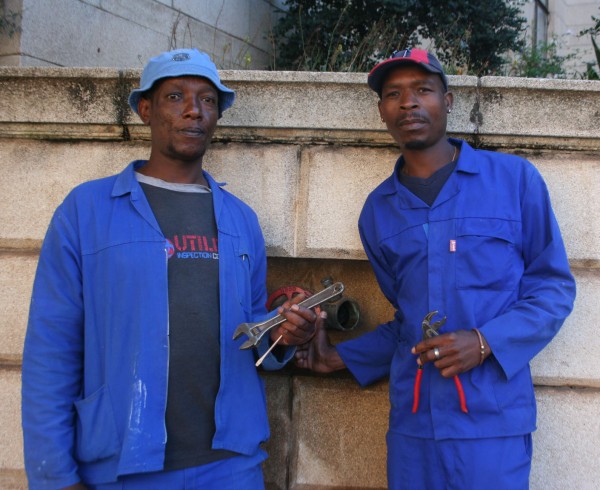 Vuvuzela met Ngwasheng and his colleague Nkululeko Mkwanazi as they were fixing a leaking fire hydrant outside the building which houses the South African Institute of International Affairs. They are plumbers for a Wits contractor.

“I have been working as a plumber for three years. I used to be in building and plastering. But sometimes there are no jobs in construction. I wanted a permanent job, to work every day. Now I can pay my children’s school fees and rent. It’s still hard. The money we get is too small.”