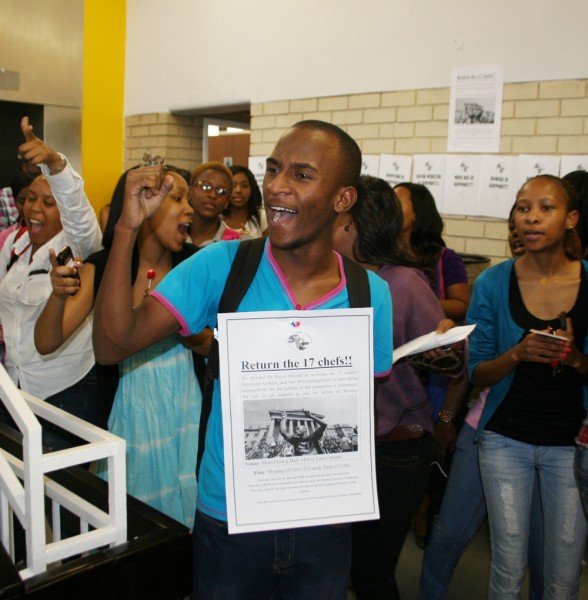 Return 17 chefs: Students gathered at the main dining hall in peaceful protest on Monday afternoon.Thousands of students cancelled their meals between Monday and Wednesday. They are demanding for the "unconditional" return of the 17 chefs dismissed for "gross insubordination". Photo: Tanyaradzwa Nyamajiyah

THOUSANDS of students cancelled their meals on Tuesday this week calling for the reinstatement of 17 dismissed chefs.

The company refused to release any figures on Tuesday afternoon.

Royal Mnandi Food Service Solutions suspended the workers in April after they refused to be transferred to different dining halls.

A working group leading the boycott said 3,300 students signed a petition in support of the chefs.

However the chefs will remain unemployed after their company rejected their appeal to be reinstated. The appeal was heard at the main kitchen in Pretoria on Monday.

The union representing the workers, Hospitality Industrial Commercial Rand and Allied Workers Union (HICRAWU), will now refer the case to the Commission for Conciliation Mediation and Arbitration (CCMA).

Students cancelled their lunch and dinner bookings from Monday to Wednesday calling for the return of the “Royal Mnandi 17” chefs.

According to All Residence Council (ARC) member Justice Nkomo, Royal Mnandi losses increased on Tuesday after the number of students who cancelled their lunch meals shot from 875 to 3 300. Only 700 students remained with booked meals.

“We asked students to go hungry for a good cause and they have complied. Students have proven that we can unite and conquer. The SRC and ARC leadership should be commended for this.”

Nkomo said students are pleading with university management to intervene in the ill treatment of out-sourced workers and do away with its policy of out-sourcing companies. “Contractors like Royal Mnandi put the university’s name into disrepute,” said Nkomo.

Students gathered at the main dining hall in peaceful protest on Monday and Tuesday chanting “Cancel lunch meals, support dismissed workers” and singing “My mother was a kitchen girl. My father was a garden boy. That’s why I’m a freedom fighter.”

A bigger demonstration is planned for next Wednesday. The boycott is being led by the Workers Solidarity Committee (WSC), SRC and ARC.

“students are prepared to implement violent action if the 17 chefs are not reinstated,” said Nkomo.