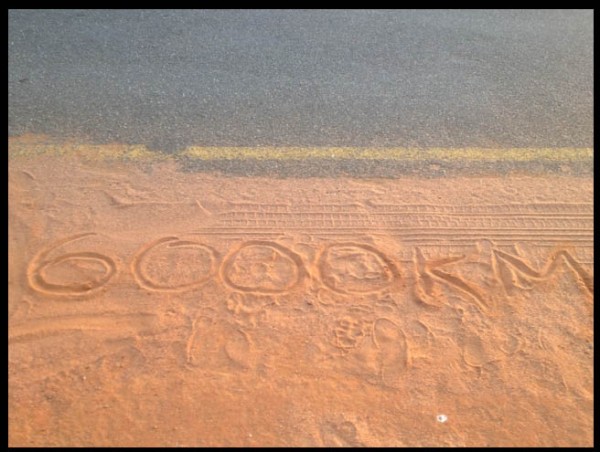 A milestone on the journey four Witsies made through Southern Africa as part of the Put Foot Foundation’s charity rally. Photo: Neighbour Hooligans.

Master’s student Robyn van Jaarsveld spent part of her vacation exploring Southern Africa and partying like her life depended on it.

“They were so excited about the shoes but they were told they could only wear them to school and church,” she said.

They did all of this during a 19-day car rally which took them through Botswana, Namibia, Zambia, Zimbabwe, Malawi and Mozambique.

The annual event was organised by the Put Foot Foundation, an adventure charity whose aim this year was to raise funds for shoes and for an anti-rhino-poaching programme in Durban.

The Witsies, who named their team the “Neighbour Hooligans”, organised a pub quiz night and asked their family, friends and colleagues for donations. They contributed R16 000 to the R350 000 raised by the 250 rally participants.

The trip was filled with memorable experiences, from swimming in the Okavango River, taking a ferry over Lake Kariba and watching the sun set over the Zambezi.

But she thought every place they visited had “something magical to offer”.

The highlight of the trip for Findlay was head-banging and bum-jiving by the side of the road in Namibia to celebrate their first 1000 kilometres. “Completely dorky, but completely epic!” she said.

The four women had many difficult moments too.

“One that sticks in my mind would be the time our brakes stopped working and another would be the 30-kilometre wrong turn we took in Malawi on the worst dirt road in the world,” Haslau said.

But they learned a lot through the experience. Haslau learned she could drive without brakes, she should be grateful for everything she has and “I have really good friends”.

Moodley said she learned that despite their poverty, people are still living their lives

and “that is something very admirable about the human spirit”.

Find more infomation and photos on the Neighour Hooligans blog.