A Game of Tries

Ten tries helped FNB Wits win their game against a very physical Randfontein Rugby Club at the Greenhills Stadium in Randfontein on Saturday.

This was Wits’ ninth victory in the Predator’s League. They won the match 73-28 and earned five points.

Wing and man of the match, Joshua Durbach, opened up the scoring with Wits’ first try early in the first half. Cracks in the Randfontein’s defence saw Wits flank Thato Mavundla and wing Riaan Arends race to the try line for the last two tries of the first half.

A weak counter-attack by Wits’ back-line and a knock-on by Durbach late in the first half resulted in Randfontein’ s centre Errard Ernsting scoring the side’s first try.

Wits made five changes in the second half, which included in-form lock Rinus Bothma and flank Thato Mavundla coming off the field.

The second half kicked off with a flurry of tries. A total of nine tries were scored by both teams in the remaining forty minutes of the match. Wits scrumhalf Dave Turnball and centre Bronson Langa scored two tries each in the second half.

Arends ended the second half of what seemed like a one-sided match with an uncontested tenth try for Wits – his second try of the match. Randfontein managed to score a bonus point before the final whistle was blown.

A win next week against Roodepoort will help Wits secure their second place in log. Wits first team coach Kyle Condon described the match as their test match as Roodepoort were a tough team to beat.

Stand-in captain Paulo Ferreira said: “Roodepoort is going to be a tough match but we are positive we have played to our structures.”

This Saturday, Wits will host Roodepoort , who are placed sixth, at the Wits stadium and they will take on log leaders UJ next week Saturday August, 11. 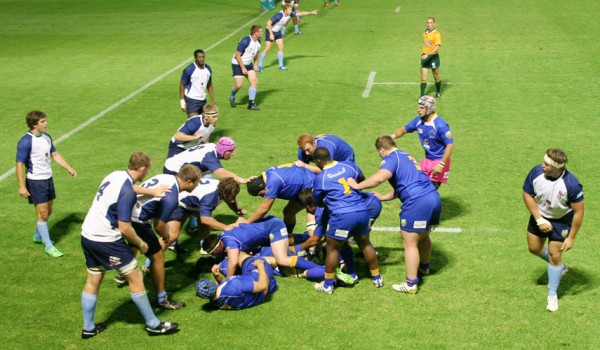