Supporting South Africa’s next generation of scientists and mathematicians 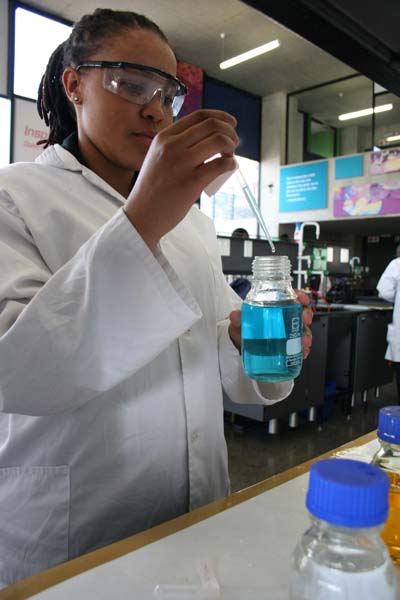 A chemistry student conducting an experiment at Wits University’s Science Stadium. The university has programmes to support high school learners who show promise in science and mathematics, as well as talented female science students at tertiary level. Photo: Tanyaradzwa Nyamajiyah

Daniel Masuku grew up in Schoemansdal, a dusty Mpumalanga backwater where most people are subsistence maize farmers. He walked 45 minutes to school as a Grade 1 pupil and attended a high school where students had to share textbooks. Masuku had never heard of Wits University, much less imagined attending the prestigious institution.

But when he finished matric, he won admission to the university’s chemical engineering and mathematical sciences programmes. He chose maths and is currently in his second year.

Masuku’s life changed when his science teacher at Njeyeza Secondary School brought him an application form for the Targeting Talent Programme (TTP), a Wits initiative to identify and support promising maths and science students from marginalized communities.

Zena Richards is the Director of the university’s Student Equity and Talent Managament Unit, which runs TTP and another programme called Going to University to Succeed or GUTS.

Richards says her job is to make disadvantaged students realize that places like Wits are an option for them.

The centrepiece of TTP is a two-week residential experience for participants which take place on the Wits campus in June.

“They live in a residence, use the dining halls, use the libraries and access the lecture rooms. So partly it’s a simulation of what university life will be like … so it demystifies it for them a little bit,” Richards says.

Masuku says his first visit to Wits was “scary”. He was overwhelmed by the size of the university and was afraid of getting lost on campus.

But it made him realize what was possible and encouraged him to dream of enrolling at the university, the first person in his family to do so.Masuku’s father is a cleaner/gardener at a hospital in Mpumalanga and his mother is unemployed. Neither of them went to school but Masuku’s mother insisted that he get an education.

Richards says many TTP participants are orphans or live in families which survive on a grandparent’s pension and getting 3 meals a day is not guaranteed. Many parents and guardians are illiterate and unable to even complete the forms required by the programme.

“But despite all of that, the passion and commitment and support for the aspirations of these kids from their families just makes me want to pinch myself,” Richards says.

TTP contributes to South Africa’s pipeline of scientists and mathematicians. But above all, it changes lives.