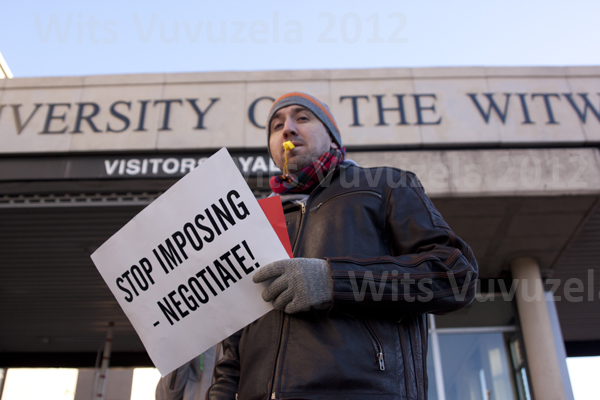 Two of the three Wits unions will strike tomorrow August 28, after they declined management’s offer in negotiations.

Last-minute talks were held between unions and management on Monday afternoon to try and prevent a second one-day strike. The Academic Staff Association of Wits University (ASAWU), the Administration, Library and Technical Staff Association (ALTSA) and the National Education, Health and Allied Workers’ Union (NEHAWU), jointly declared a dispute in May over a range of grievances including salary increases and insufficient parking.

In talks which ended around 5pm on Monday, management proposed (among others): a shift from the July-to-June pay cycle to a January-to-December pay cycle (to create a salary increase in January 2013), negotiations for next year’s salaries to begin next week, a written understanding of the 75th percentile salary benchmark, and a commitment to resolving non-salary issues by year end.

Joint union spokesperson Kezia Lewins said there was “insufficient movement” towards a resolution by 5pm, the time it had been agreed that negotiations would end.

“Given that no agreement could be concluded and management’s disinclination to continue with the negotiation process, the planned strike will go ahead,” Lewins said.

Lewins said management threatened to withdraw all the offers if Tuesday’s strike went ahead.

“It is regrettable that ASAWU and NEHAWU have rejected these offers without explanation or counter-offers, and have announced their intention to continue their strike action tomorrow,” Kasonkola said.

“Upon stating that they would be reporting back to their principals, Professor Ballim (Deputy Vice Chancellor Academic) told the unions “off you go!” Lewins said. According to a tweet from ASAWU (witsjointaction), the vice-Chancellor Loyiso Nongxawas not present during the negotiations.

How Wits stacks up against other academic institutions

The Human Resources department conducted a comparative salary analysis to show how Wits’ range of salaries compares with other research-intensive institutions.

Kasonkola said these values do not show the full salary packages at institutions, but Wits is currently a “market leader” in academic salaries.

Also, the 7.55% and 6.8% increases granted to academic and support staff respectively were above the Consumer Price Index (CPI), pegged at 4.9% in July.

Management re-invited the three unions to the negotiating table over the weekend, nearly a month since their first strike on August 2.

The Wits Senate (the academic leadership forum) had called on the Wits Council to resolve the dispute “without further delay”.

Union members intend to picket at major entrances to Wits in the morning, and hold a rally on the steps of the Great Hall at noon.