The Honours in Journalism class of 2012 ended off their academic year by publishing Joburg Justice – an in-depth investigative project that focused on the criminal justice system in South Africa. 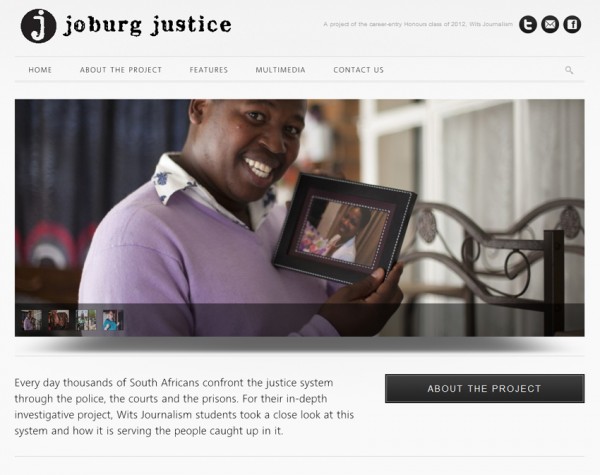 The class of 16 spent two weeks researching their stories in and around the city of Johannesburg, and produced a 2000-word story and a multimedia piece. The group was mentored by staff of the Journalism department and the Wits Justice Project. The project focused on the three themes of economic, gender and social justice.

The full length features are listed below:

Nandi Ndlazi: A means to an end – the struggle to secure Legal Aid in South Africa

Zandi Shabalala: The rusty wheels of justice – the state of our courts as seen through the eyes of the people who work there.

Lisa Golden: The axe forgets, the tree remembers – what are the legal requirements after a rape has occurred?

Jan Willem Borman: Challenging the Constitution for tradition – a look at the standing of women in traditional legal processes.

Luyanda Majija: oMama beziboshwa (mothers of inmates) – an introduction to the life of an ICSV – independent correctional services visitor.

Lebogang Mdlankomo: A system waiting to be corrected – how does the law treat ‘corrective’ rape?

Jay Caboz: Tougher outside than inside prison – a look at the reintegration of rehabilitated prisoners back into society.

Charlotte Chipangura: How the system raised a boy – a story of a parent’s issues with the Child Justice Act.

Hazel Meda: Prison visits: A vital link to the outside – an exploration of the vital role of family visits to the well-being of prisoners.

Anina Mumm: Forensics for justice – a story that emphasises the importance of the national DNA database in the fight against crime.

For the multimedia element of the projects, students choose from a variety of platforms to showcase their stories on Joburg Justice.

Simmi Areff: Back to Basics: Before Facebook [VIDEO] – a look at the crackdown on the use of cellphones by prisoners.

Nandi Ndlazi: No means of defence [VIDEO] – interview with a young woman left without legal representation to fight criminal charges.

Akin Oyedele: Justice for Mahala [VIDEO] – an interview with pro-bono lawyers examining the difficulties of their jobs.

Zandi Shabalala: Magistrates Courts in desperate need of revamp [VIDEO] – how the state of our courts affect the efficiency of the judicial process.

Lisa Golden: J-88: A form you never want to have to fill out [VIDEO] – a video demonstrating the various components of the J-88 form which is key to a successful rape conviction.

Luyanda Majija: The maternal role of female ICCV at home and work [VIDEO] – the story of a female independent correctional services visitor and how her job affects her private life.

Lebogang Mdlankomo: Corrective rape – gay victims do not get justice [VIDEO] – a video that emphasises the added difficulties for victims of corrective rape.

Jay Caboz: Prisoner’s living again [MULTIMEDIA] – a multi-layered piece which looks at the lives of two former inmates and their process of reintegration.

Charlotte Chipangura: Dad in distress [VIDEO] – an interview with a father who has struggled with a piece of legislation that was meant to protect his son.

Hazel Meda:  Love – a prisoner’s lifeline [SOUND] – an interview with a man who spent time in prison and relied on the love of his family to see him through incarceration.

Anina Mumm: Will the men in blue respect your blueprint? [STORIFY] – a curation of resources which illustrate the importance of the South African DNA database in fighting crime.

Tokelo Nhlapo: The price of accusation [VIDEO] – a video which explores the lives of prisoners and their struggle with reintegration.

Zinhle Tshabalala: Skills offer offender economic freedom [VIDEO] – a video which explains the importance of prison education and shows the lack of such services.