Wits not dealing with ‘hard-hat mafia’ 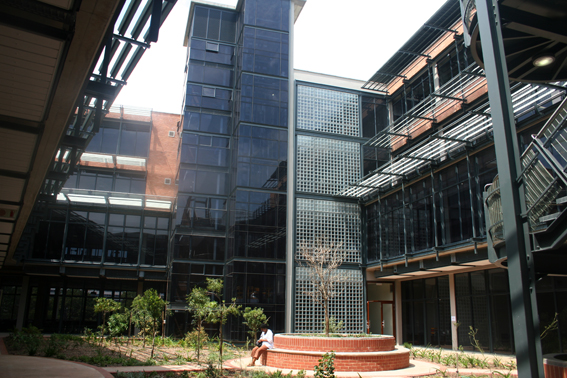 Wits buildings like the newly opened Public Health building pictured above, have been undertaken through contracts with construction companies not implicated in the ‘hard-hat mafia’ scandal. Photo: Mfuneko Toyana

“Hard-hat mafia” is the sinister name being used to describe the group of powerful construction companies and executives currently under investigation for collusion and tender-fixing some of the country’s biggest infrastructure projects worth billions of rands.

Director of Wits’ Campus and Development Planning (CDP), Emannuel Prinsloo, told Wits Vuvuzela that none of the contractors employed by the University for recent projects has been linked to the scandal.

He said it was thanks to an “independent and thorough” procurement strategy that the university had been able to avoid falling victim to the over-pricing and tender fraud that has affected projects as large as the Mandela Bridge and a few 2010 World Cup stadiums.

Prinsloo explained that Wits differentiated between construction procurement and normal procurement, and relied on a team of industry experts to assess tenders for all its programmes on a project-by-project basis.

The team, made up of former National treasury employee Ron Mortimer, Sam le Roux from Wits’ School of Economics, a quantity surveyor and a project manager, rated bidding contractors and compiled a report for the tender committee which made a final decision based on these scores and a review of the entire procurement process.

Project manager Spencer Hodsten pointed out that CDP received clean audits from the Department of Higher Education for the past five years, and that last year spending on construction projects exceeded the budgeted amount by only 5%.

He attributed this to Wits’ policy of sourcing tender bids from a large pool of candidates and giving contractors enough information before-hand in-order to avoid inflated projections.

Affidavits given by construction firm Stefanutti to the Hawks in 2011, and leaked two weeks ago to the media, describe how executives of top construction firms  would meet in secret to decide what big tenders should go to whom and at what price.

This price would include anything between 8 to 12 percent extra, between R100k and R5 million, of the true cost of the project. The extra money would then be paid to the firms who had agreed to “lose” the tender by the winning firm, in the form of fake invoices for services never actually rendered.

Whilst both gentlemen of the CDP agreed that this kind of boardroom corruption was the norm in the construction industry and posed a threat to economic growth, they also pointed out that “fast tracking projects without the proper planning was fast tracking those projects to disaster”.