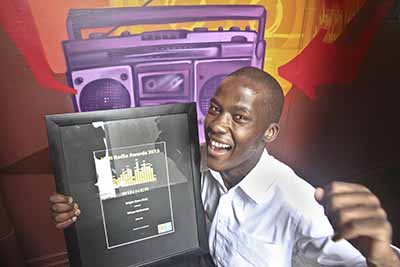 Makhubela aka DJ Thirteen received the Bright Star award, which is awarded to “young individuals within the industry who are making their mark and who show promise for the future,” according to the website.

“I did not think I would win this award. I know a few people on that list [of nominees] and they are freaking awesome hustlers. They do groundbreaking stuff and I thought they would win,” said Makhubela.

Makhubela received the award for work he did at the Wits Radio Academy with blind student Chantal Ferreira.

“They didn’t know how to conduct her training. Things like how to use the desk and other technical things. When Franz Kruger approached other lecturers they all said it was impossible and would  not work. When Franz asked me if I thought it would work, I insisted that we would make it work.

“At the end of the year Chantal was able to work the desk on her own, prepare her packages, etcetera, without any assistance, and she graduated from the academy. I shape-shifted a mindset. Impossible is nothing.”

Makhubela’s work was submitted on his behalf by the VoW Board and the Wits Radio Academy. He said he was unaware that they had done this and appreciated the fact that they recognised his work.

This was not the first award Makhubela has received for his work. He also works for DJ Zinhle’s Fuse Academy, where he trains and mentors female DJs. Last year, the academy presented him with a Best Lecturer award.

“When working with women and trying to get them to work into a male-dominated industry it is important to first shape their minds. Impute words and then do the training,” he said.

Makhubela has been working on radio for one year and said this had been a stepping stone for him as well as an opportunity to step out of his comfort zone.

MTN also awarded a bursary to News reader and Sports Hub co-host, Lonwabo Miso. “I was chosen out of all my classmates in the Radio Academy for the year 2013. It was an amazing, overwhelming and spectacular feeling.”

Miso said she planned to have a career in news and sports reporting on a commercial platform. “For now I want to do news and sports, but we are still going to be taught a lot more at the academy so I may add to this later in the year.”