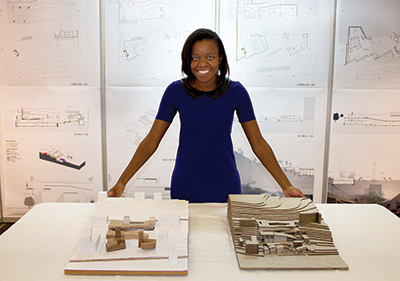 A WITSIE has won a prestigious architectural award and a R50000 cash prize for her design of a “safe, sanctified and religious” refugee centre.

Nontokozo Mhlungu’s winning project, Hillside Sanctuary: Reception centre for the urban refugee was chosen as winner of the Corobrik Architectural Student of the Year Award on April 18. She beat applicants from seven other tertiary institutions including top universities like University of Pretoria and University of Cape Town.

Mhlungu’s project explores the issue of refugee survival in Johannesburg. The idea came about after she watched a Special Assignment report about attacks on Zimbabwean refugees in a Gauteng township.

“I realised that our government and we as a society of architects and professional were failing to recognize and cater to the basic needs of the man on the street,” Mhlungu said.

Mhlungu was inspired by the Johannesburg Central Methodist church which has opened its doors as a sanctuary for migrants and refugees. She wanted to design a “safe, sanctified and religious facility that is better suited to meet the needs of refugees and displaced urban migrants.”

Mhlungu said she felt strongly about architecture playing a role in shaping the lives and communities of the under-privileged.

Even though she now works for a company that specialises in hotel and resort architecture, in the future she wants her work to benefit the needy. Mhlungu hopes that her idea will one day be brought to life: “It would be amazing if I could get an opportunity to pitch the idea to the right people.”

As for the money she won, she has not made any major plans for it yet but she might have to use some of it to pay back Wits for fees. Then “I can enjoy the rest” she said.