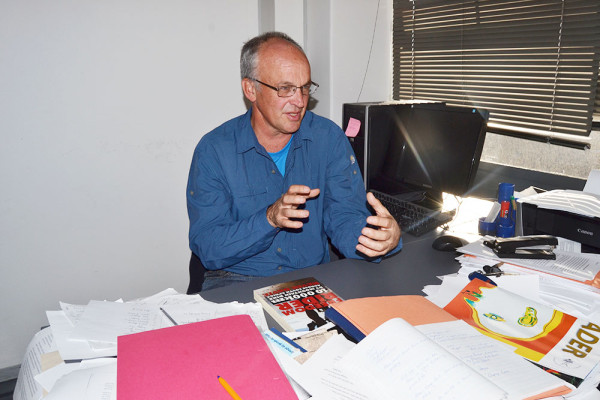 Kevin Davie only needed two and a half hours of sleep to cycle 600km in 63 hours last week. The average person needs at least eight hours.

I have never done that before

Davie said he had never done a challenge like this before but was always interested undertaking an endurance sport with little sleep.

“I have never done that before. The first night I didn’t sleep at all and that next morning I did need to sleep for like half an hour,” said Davie.

During his 30 years as an off-road cyclist, Davie has cycled a total of 10 000 km.  He was the 24th person to ever complete the Freedom Challenge; a 2300 km mountain bike ride between Pietermaritzburg and Cape Town.

“Well I’ve always liked adventure sports…it’s a way to stay fit. It’s a way of getting to explore a country and meet people on a quiet a basic level. You are not arriving in a 4X4 but on a bicycle and people relate to that”.

The most amazing thing

Davie said he was amazed at how his body was able to complete such a challenge on very little sleep.

“The most amazing thing was that twice I was really tired and completely finished. Both times what I did was I took a short sleep one was ten minutes and the other was 20 minutes. And after those sleeps I was back as fresh as I had started,”

Support from friends and family

Davie was able to complete the bike ride with the assistance of his friends who rode along with him at different points of the off road challenge. He said his family and friends were surprised and amazed when he finished the “impossible” non-stop 600 km bike ride.

Davie said preparing for the challenge was difficult. He had to follow a strict low carbohydrate and high protein diet.

“It’s a kind of way of life…in my mind it’s just a healthy way to live that you build experience and a good diet to your life.”

Davie recently published a book “Freedom Rider, 10 000 km by mountain bike across South Africa” which tells the story of Davie’s mountain bike adventures which lead him discover some of South Africa’s most beautiful hidden corners.

Davie said he had future plans to do more rides and explore more parts of the country. He said biking was a good way to explore and to be with one’s thoughts, he encouraged cyclists to just do it.

“Get your bike and get out there and just explore”