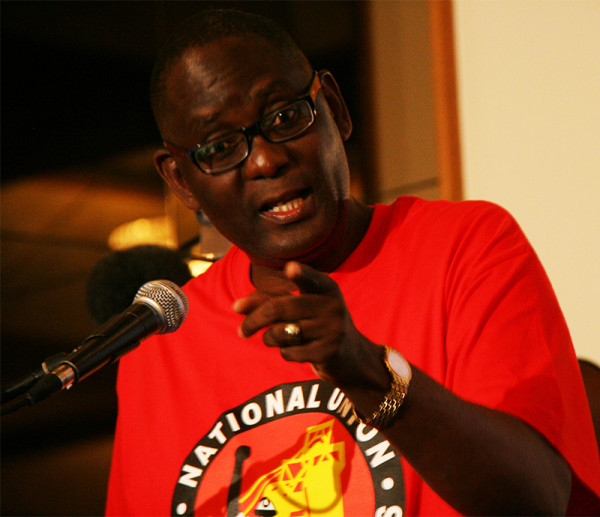 The atmosphere outside Braamfontein’s Parktownian Hotel was fraught with tension and expectation, as supporters of beleaguered Cosatu secretary-general danced and chanted slogans of support for Zwelinzima Vavi (@zwelinzima1) asking why he was being targeted.

“uyenzeni u vavi?, we Sdumo awu phendule,” asked the crowd as they waited for him to address his first press conference since his suspension.  Sdumo Dlamini is the president of Cosatu.

Inside, Vavi, sporting a red National Union of Metalworkers of SA (NUMSA) tee shirt ,  provided the answer when he handed out two sets of documents that he said revealed a plot to turn the labour union “into a labour desk of the governing party”.

One document was a letter from his lawyers challenging the legitimacy of the committee that suspended him. The other was an annexure to the letter, and reproduced an “intelligence document” that Vavi said revealed a plot by those “waiting in the long queues of the corruption trough” to blacken his name and the names of those who were fighting for the working classes.

“One of the intentions of the so-called intelligence report is clear: to destroy Cosatu,” Vavi said.

Vavi claimed the report was being distributed by those whose aim was to divide Cosatu, as well as “discredit and destroy a number of other prominent South Africans such as Tokoyo Sexwale, Judge Dikgang Moseneke, Cyril Ramaphosa, Irvin Jim etc.” “It aims to create paranoia to achieve its aim of annihilating its opponents.”

The document contains transcripts of meetings and telephone conversations, with Vavi discussing amongst other things plans to join Julius Malema’s party the Economic Freedom Fighters.

Vavi said the document was a complete fabrication doctored by “rouge” intelligence agents under the influence of factions in tripartite alliance.

At a number of stages during the press conference Vavi took deep breaths and the weight of the allegations against seemed to tell. He said nowhere else would  having a consensual relationship with a co-worker, demand the dismal that his detractors were gunning for.

“If Jesus was to return… [he] would be surprised at some of the people throwing stones.”

Vavi said he had apologised for his mistake, and that the incident was being used to remove him as general-secretary via trail by media. “I face no criminal allegations as I stand before you now,” Vavi said in response to a question of whether it would not be best for him to just step down.

Vavi said he had instructed his lawyers to challenge his suspension, citing amongst other things that Dlamaini and other members of committee that suspended him had prejudiced themselves by circulating the “intelligence report” and publicly declaring him guilty.

Vavi said Dlamini denied circulating the report. Earlier on in a Numsa press conference the  federation’s secretary general Irvin Jim  said they had no confidence in Dlamini as a leader.