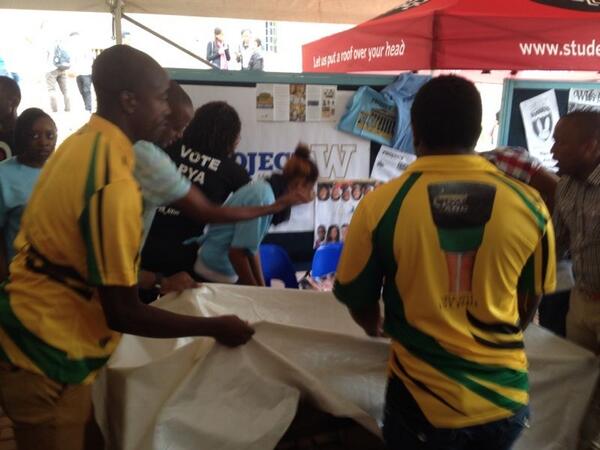 UPDATE: The Wits branch of the Economic Freedom Fighters (EFF), has accused the Progressive Youth Alliance (PYA) of political intolerance after the PYA attempted to remove EFF from the clubs and society tent earlier on today.

Campus control officers were called, apparently by SRC clubs and society portfolio holder, Sarah Mokwebo, to remove EFF members from the table which they were occupying in the tent.

“They said we are not registered. We are not a club and society,” said EFF Wits chairperson Vuyani Pambo. Pambo admitted that EFF was not a registered club but said they would not move just because an “ANC-led SRC does not want EFF.” Even though they refused to move, Pambo said they did willingly give Campus Control their details.

ORIGINAL STORY: A squabble broke out during O-week on Tuesday after Project W was  “banned” and told it could no longer operate as a club or society at Wits.

The altercation took place in the O-week Clubs and Society tent when Project W set up a table there.

Project W SRC member Jamie Mighti told Wits Vuvuzela Project W was banned last year for “having a constitution that is not in line with the SRC’s constitution”.

Mighti, said Project W had appealed the ban and decided to set up their table at the Clubs and Societies tent because “we were banned illegally.”

He said the squabble began when SRC clubs and society portfolio holder and Progressive Youth Alliance (PYA) member Sarah Mokwebo came over to their table and told them to leave. Mighti said other PYA “comrades” came and started forcibly moving them. 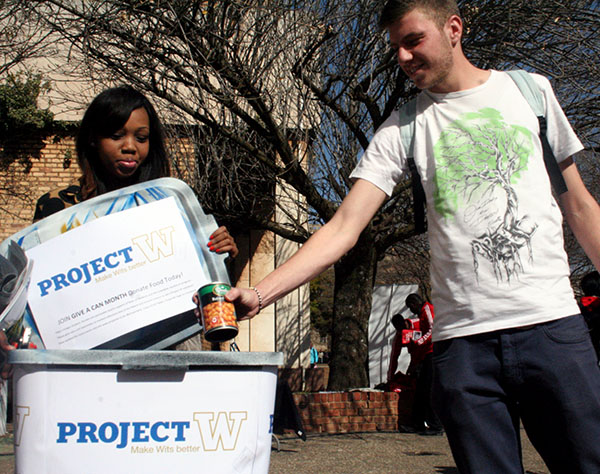 Project W who form part of the SRC this year has been disbanded.

“[It] is not their job to do, that is the job of campus control,” complained Mighti.

He said he has laid assault charges against Mokwebo with Campus Control.

Mighti said the decision to ban Project W was not taken by the SRC as a whole but was made by SRC president and PYA member Shafee Verachia and Mokwebo.

Mokwebo rejected Mighti’s claim that Project W had been “banned”.

Last year, the PYA won a narrow majority during the SRC elections. Eight PYA member and seven Project W members were elected to make up the 2013/14 SRC. One Project W SRC member, Kay Mlaba, has since left Wits and her position on the SRC.  There will be no replacement for Mlaba. She held the international relations portfolio which will now be taken over by another member of the SRC.