HEI life not over for café owners 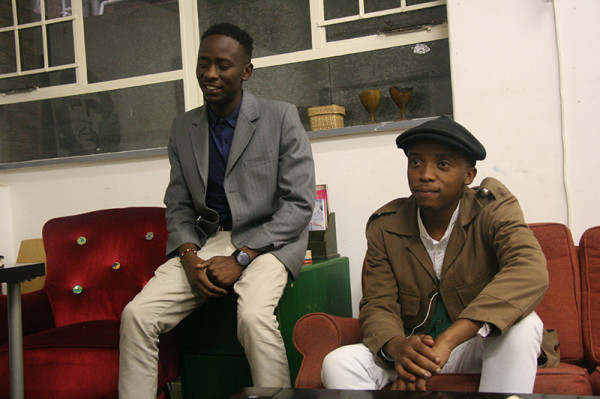 Co-owners of HEI cafe,Edlison Chuene and Lincoln Ncame are determined to see the cafe open its doors once again.

The owners of HEI  Café, in Braamfontein, which closed down two months ago, are determined that the café will reopen its doors.

Co-owners of Hei Café  Lincoln Ncame and Edlin Chuene are confident about the future of HEI café, at 26 Melle street, Braamfontein. “It is the love of our lives,” they both say.

Ncame strolls towards me with an effortless bounce, his vintage swag buttoned firmly in a chunky cardigan.Next to me, Chuene’s face crinkles into a soft smile, as he explains the significance of the café and how its demise came about.

The café is an extension of the Hillbrow Entrepreneurship Initiative (HEI). A non-profit organization that helps people start up their own self-sustaining projects. The profits from the café have carried the work of the NGO, and while donations are coming in steadily, the gap of the investors is undeniable.

The popular café closed down after the rent had gone unpaid due to investors pulling out, leaving the café financially unsustainable. Now what once was  the “rabbit hole” of Braamfonetin has gone eerily silent. HEI  Café, has always been “different”, its loyal followers and regulars say.

[pullquote align=”right”]“We’re outliers, it’s harder to be an outlier but its more rewarding,”[/pullquote]

Housed in 100sq in what once was a dingy alley way behind Nando’s, the café welcomed volunteers from all corners of Braamfontein who wanted to make a difference by offering a space to young entrepreneurs and self-starters who needed to hold meetings and interviews.The café launched in 2013, opening its doors to curious and quirky Braamfontein  citizens.

The café  with its cheeky vintage mood  hosted music gigs throughout the year and became home to many regulars who used the unassuming alleyway to escape the hustle and bustle of Braamfontein.

Despite the financial difficulties, Ncame and Chuene have taken it upon themselves to find a way to make HEI Café work. The challenge lies in that HEI is different,“We’re outliers, it’s harder to be an outlier but its more rewarding,said Chuene.

[pullquote]“When it (HEI) [re]opens, it will show that people can give themselves to a cause,”[/pullquote]

The Braamfontein alleyway art programme has managed to clean up the dingy alley, marking the entrance with fluorescent coloured umbrella’s, inviting all sorts of curious travellers to HEI’s doorstep.

Where there’s a will there’s a way. Ncame and Chuene are adamant that HEI will make its return .Chuene said that if people put more effort into who they say they are, we can do more change.“When it (HEI) [re]opens, it will show that people can give themselves to a cause,” said Chuene.  Their attitude is: Hei will survive