IAW: The beginning of peace? 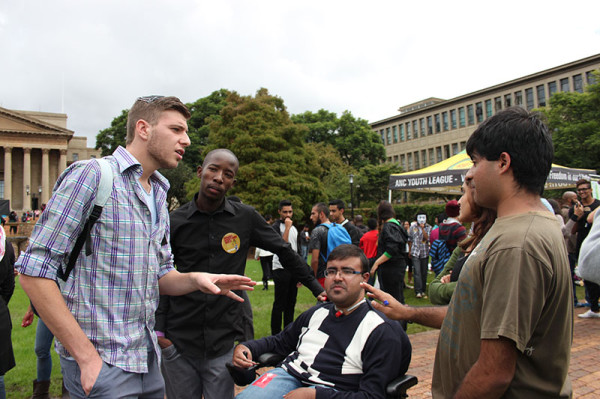 LISTEN TO ME: A South African Union of Jewish Students (SAUJS) and pro-Palestinian supporters and Wits Palestinian Solidarity Committee (PSC) members involved in a heated argument on the library lawns during IAW on Wednesday.
Photo: Nqobile Dludla

ISRAEL Apartheid Week (IAW) at Wits was marked by several simmering arguments, many requiring the intervention of Campus Control to resolve.

In the past, IAW was marked by vandalism, protests and demonstrations. Last year, a concert by an Israeli pianist was disrupted by Wits students protesting for Palestine.

This year, Vice Chancellor Adam Habib authorised both IAW as well as pro-Israel events to take place at the same time and asked for both sides to show tolerance for the other.

“The university is granting permission for these events in the interests of allowing for the expression of diverse viewpoints and reasoned debate on issues confronting society,” Habib said in a statement.

Wits Palestinian Solidarity Committee member Tasneem Essop told Wits Vuvuzela they were not satisfied with the arrangement because they had applied for their event first.

“I struggle to see why we should have to share our spaces,’ she said.  “The university is reckless and inconsiderate in doing this because we put our application in first.”

Student groups were left sharing university space to get their messages across, though the sharing often emphasised how divided the two sides were. The organisations were both able to set up tents and placards on the library lawns. However, they initially quarrelled over where their respective tents could be positioned.

The wall outside the Matrix was similarly divided, with the SA Union of Jewish Students (SAUJS) decorating one side and the Wits PSC the other. An additional pro-Palestinian message, “Boycott Apartheid Israel”, was also spray painted on the back of the wall. Campus Control officers were stationed at the wall around the clock to prevent vandalism.

One exception to this sharing was the tunnel separating East and West campus which was decorated only with SAUJS graffiti. Essop said PSC had planned on also decorating the tunnel but were not able to find a graffiti artist in time.

The theme of the SAUJS events was “Wings of Peace”, while the motto of the Wits PSC was “Boycott Apartheid Israel”.

Despite the concurrent events, there was little engagement between SAUJS and PSC members beyond arguments.

On Monday, PSC and SAUJS members had a heated argument over the former’s loud hammering during a lecture organised by the latter. The argument ended only after the intervention of Campus Control.

During the week, Wits PSC set up a finger-painting station where students could put a stamp on a piece of cloth that was in the shape of the Palestinian flag. Meanwhile, SAUJS displayed pictures and held talks with the aim of promoting their stance.