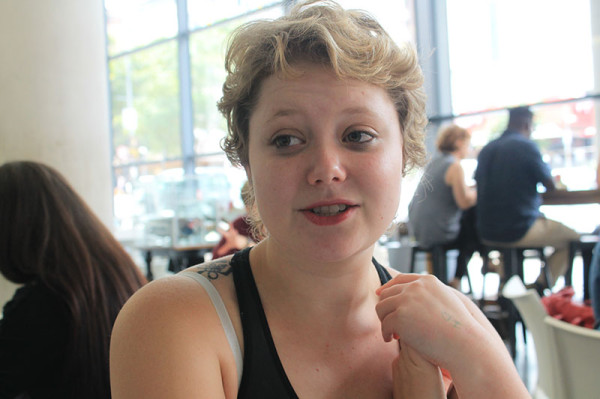 I’M INNOCENT: the choreographer and lead actress of the play ‘Speak Sign Love’ Amy de Wet says they are being wrongly accused by the deaf community.
Photo: Percy Matshoba

THE Wits deaf community are up in arms over a new play they say ignores their culture and violates their values.The community has accused the producers of Speak Sign Love, a play about the romantic relationship between a deaf woman and a hearing man, of refusing to cast a deaf person in the leading role.

Amy de Wet, the co-creator of the play, said Speak Sign Love aimed to raise awareness about the communication barriers between the deaf and hearing.

She defended the casting of the play and said “circumstances, logistics and deadlines” did not allow for the production to cast a deaf actor.  De Wet herself was ultimately cast in the lead role of a deaf woman.

Chelsea van der Merwe was a co-creator of the play but left the production in protest because she believed the play misrepresented the deaf. She said she proposed deaf actors who could be auditioned for roles but was turned down.

“We had initially cast deaf members and they later cast an all hearing cast,” van der Merwe said.

[pullquote]“Deaf people are capable of speaking for themselves … the deaf community had historically been represented by people who did not understand deaf culture.”[/pullquote]

Dr Michiko Kaneko, head of the Wits South African Sign Language (SASL) department, said the production was inconsiderate to the deaf community as they did not involve deaf people in the play.

“Deaf people are capable of speaking for themselves” she said. Kaneko said that the deaf community had historically been represented by people who did not understand deaf culture. She said hearing people should not portray deaf characters.

Members of the Wits community have been expressing their anger over the production, particularly on social media.

“That is unfair that deaf people never get a chance to perform in theatre. Hearing people always achieve things and we as deaf people are neglected. We feel used for our language,” said Dalene Maasdorp, a member of the Wits deaf community.

“I feel like they are only mocking our language.”

De Wet defended herself from the complaints and said the Wits deaf community was angry because they had wanted a platform for deaf students to participate in. She said that the production made efforts to find a deaf actor but was not successful.

“The accusations on our social networks are false,” de Wet said.

Some members of the deaf community took to defacing posters promoting Speak Sign Love with stickers criticising the production.

“This production is strongly OPPOSED by staff and students at Wits SOUTH AFRICAN SIGN LANGUAGE department as it is in contradiction of the values and principles of the Deaf community,” read the stickers.

Kaneko said that while Speak Sign Love said it had consulted deaf people, their production accreditation did not support this claim.

De Wet said that she was not an expert on deaf culture but had taken a course in sign language and did research prior to creating the play.

De Wet said she had published on the production’s Facebook page that she was open to discuss the  deaf community’s concerns but had not received a response.  She said it was “ironic” that the deaf community was accusing the production of misrepresenting their culture before the play had even been launched.

“There has been a lot of accusations and a lot of problems but no one has ever seen the show,” de Wet said.