The stress of end of term tests was added to by downtime of the Wits e-learning system Sakai this week.

Problems with access to the Wits-e portal have created added stress for the many Witsies who have been writing end-of-block tests and trying to submit assignments.

Students have been struggling to access notes and haven’t been able to submit their assignments timeously due to problems with the e-learning site.

Ntombi Mkhize, 3rd year MBBCh, has been having “internet problems since Friday”.

[pullquote]It’s a bit of a mess because all our announcements are either on Sakai or on Facebook groups. It’s frustrating.”[/pullquote]

“Sakai seems to be working properly but you need to constantly refresh or enter the URL multiple times. It’s a bit of a mess because all our announcements are either on Sakai or on Facebook groups. It’s frustrating.”

Maggie Lephale tweeted Wits e-learning on Tuesday saying, “Sakai down again, been trying to submit my assignment for the past hour”.

Wits Vuvuzela managed to speak to Lephale on Wednesday. “The only problem is that I missed the deadline [for the submission of the assignment]. I hope it doesn’t happen again,” she said.

Nkululeko Nkosi, 3rd year LLB, said he “luckily” didn’t have a test this week, but he does have an assignment due and the “internet from res is slow.”

“I’ve resorted to using Com labs. I can’t access Sakai from res. I have to go to main campus to access it. I’ve asked the SRC to look into it though. I [also] can’t access online resources from my laptop at res. I can only access them using a computer on campus. It also takes time for Sakai to load, it’s very slow.”

Wits Vuvuzela spoke with Mitchell Hughes, lecturer in Information Systems in the School of Economic and Business Sciences about lecturer problems with Sakai.

Although Hughes’ experience of Wits-e “has been good”, he has noticed that “there has been … more downtime in 2014 than in previous years.”

“It has been more of an inconvenience than genuinely prohibitive for me personally though.”

Hughes took to reassuring students who have been having troubles with Sakai. “We will accommodate a known and widespread issues wherever possible,” he said.

(e-) Learning not to rely solely on the system

“The difficult lies in distinguishing a genuine issue from an excuse for simply leaving things too late and then conveniently blaming the platform.”

On March 25, Wits-e put a warning out to facilitators to be “cautious” about using the platform for the moment because there have been problems and complaints with it. 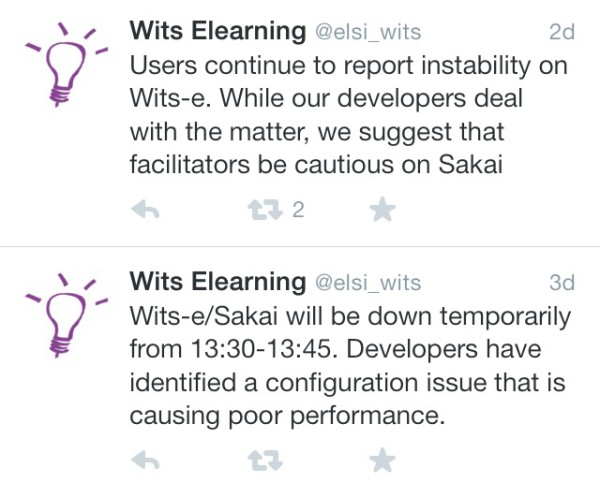 DOING THEIR BEST: A screen-shot from the Twitter account of Wits Elearning informing students of problems and assuring them that the developers are working on rectifying the issues.

In response to this, Hughes replied, “My reading is that it is [advisable] not to rely solely on the platform … This is worrying as we are being encouraged to make as much use of the platform as possible and … we need to be able to trust it. I would certainly be in favour of increased resource support for eLSI”.