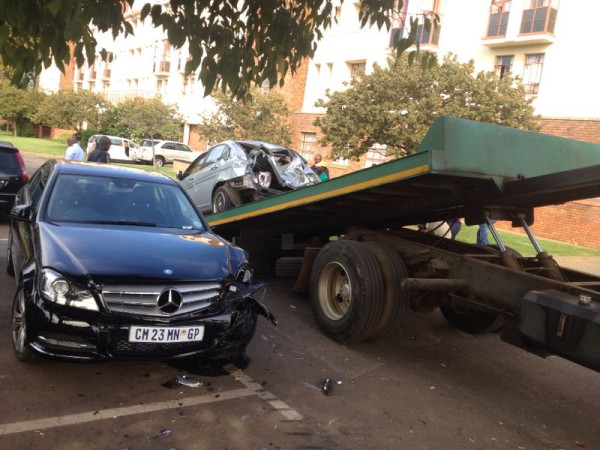 WRECKED: Two cars were the victim of a tractor that lost control on west campus today. Photo: Wits Vuvuzela.

Two vehicles were written off in a huge car crash on Tuesday on the Wits west campus.  It is rumoured that the driver who crashed into the cars did not have a license.

The accident happened by the Diggs Fields parking area when a tractor smashed into a black Mercedes and a grey Hyundai Accent badly damaging the vehicles. Both vehicles belonged to students on campus, one a first year and another a 4th year LLB student.

According to security and liaison manager Lucky Khumela excessive damage was done to the Hyundai and the owner “was concerned because a baby’s pram inside the boot of the vehicle was also badly damaged”.

[pullquote]“He really had to justify his life for the vehicles.”[/pullquote]

Kabelo, (who wouldn’t give us his surname) the driver of the tractor, said he was driving and tried to turn left to go to Sturrock Park to load the 13 tonne machine it was pulling, but his vehicle failed to turn.

He tried to brake but failed.  The vehicle turned as he was moving downhill and he tried to put it in gear to stop.

But it was already approaching a steep hill. The driver defended his actions on the basis that if he did not smash into the parked vehicles, the tractor would ended up in a ditch, an accident that could have led to his death. 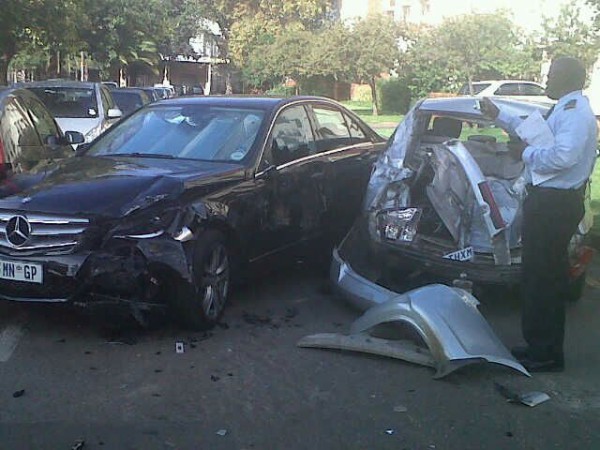 “He really had to justify his life for the vehicles,” said Khumela.

An eye-witness said that as the driver was coming down the hill, his brakes failed and there was an oncoming truck.

“He swerved into a car parked on the side, subsequently it hit the car parked in front of it,” she said.

Another eyewitness said the driver lost control of his vehicle after hitting a speed bump and “smashed into two cars”.

“Fortunately all the vehicles were empty at the time, so no one was hurt,” he said. “The driver escaped with no visible injuries but he was in shock.”

There were rumours circling the scene as onlookers whispered that the driver did not have his driver’s licence or was authorised to drive the vehicle.  Wits Vuvuzela is unable to confirm these allegations at this point.