Witsies are underwhelmed by the new colourful, flavoured condoms which will soon be free from the government.

This week Minister of Health Aaron Motsoaledi, announced the new condoms after a survey by the Human Sciences Research Council showed that condom use in South Africa had decreased.

The survey also showed that boys were starting to have sex at a younger age, young people were sleeping around more and becoming less knowledgeable about HIV/AIDS. 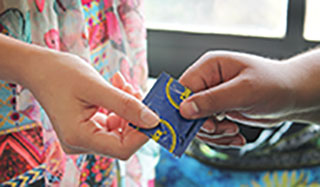 SAY “I DO”: Students think twice before doing the deed using Choice condoms. Government hopes this will change with the new condoms. Photo: Zelmarie Goosen

But the new condoms are unlikely to make any change to the sex habits of students, according to a number of Witsies approached by Wits Vuvuzela.

“Choice sucks and they [condoms] stink, so even if they make them colourful and add flavour to them, it won’t make a difference to me, I won’t use them,” according to Zama Mthunzi, 1st year BSc.

Aurelia Dako, 3rd year BA, said it was better to use bought condoms than the free condoms provided by government. “To me, the difference is that they [government condoms] are free. A person shouldn’t mind spending [money] for their health instead of getting them for free.”

Young women say they are sometimes reluctant to have sex using the free condoms, even going so far as to stop in the heat of the moment when their man pulls out a Choice condom.

On the other hand, one young woman said she would not spend money on condoms and that Choice condoms were better quality than those sold in shops.

Some of the men said they would not mind using the free condoms if they did not have enough money to buy their preferred brands. The price of condoms varies from R12 to R38 for a pack of three. The most popular brand among young people is Durex, according to the students approached.[pullquote] “Choice sucks and they [condoms] stink, so even if they make them colourful and add flavour to them, it won’t make a difference to me”[/pullquote]

Despite the different colours and the flavours, young people say they still prefer store-bought condoms because of the texture variations like studded, ribbed and ultra-thin, which students claim makes the sex more pleasurable.

Choice condoms are available in most campus toilets but, in his statement, the minister said students were not using them. Approached for comment, spokesperson to the minister, Joe Maila, said: “We suspect young people prefer fancier condoms so our department wants to make the Choice condoms more appealing, make them cool and funky.”

The department hoped the rolling out of new condoms would help control increased teenage pregnancy rates and HIV infections.

Maila said the department would use the same budget it was granted for the current condoms to produce the new ones. “Even if we use one cent more than our initial budget, this is an investment, we are preventing the spread of disease and creating productive, healthy members of society.”

Currently 23% of women between the ages of 15 and 49 are infected with HIV and only 14.5% of males between the same ages, according to the HSRC survey, quoted in Business Day. The infection rate among teenage girls between 15 and 19 is eight times higher.

The condoms will be distributed for free at South Africa’s universities and Further Education and Training (FET) colleges.