NETBALL: Jubilee staggers behind as Sunnyside net in a 22 victory 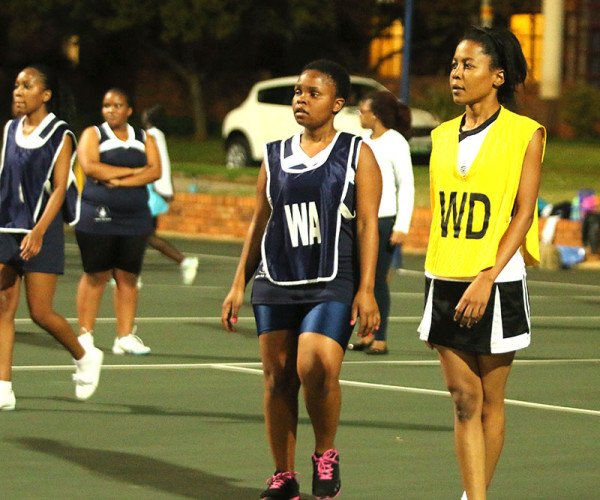 SUNNYSIDE UP: (L-R) Jubilee’s Dia Mpopo and Sunnyside’s Venia Chirombe. Sunnyside has managed to win two out of three games thus far whilst Jubilee has only won one out of three. Photo: Nqobile Dludla

Once the most-feared netball team on campus, Jubilee was defeated 22-8 by Sunnyside in the third leg of the Wits Internal Netball League at the Digs Field on Tuesday, April 22.
Captain Makoma Molapo admitted the team lacked sparkle and “were not up to par”.

“This is not like Jubes. Everyone knows that this is the team to look out for. Today particularly I feel like most of the players were not up to par. I don’t know what was wrong with everybody: not catching balls, not throwing in the right spaces, it was just a mess. No-one looked prepared to come play the game and win the game.”

Commenting on their recent performance, which has lost them two games out of three in this year’s league, Molapo said: “Most of our team members graduated and left this year so I’m literally the only one standing from last year. Clearly we have a lot of work ahead of us and we need to learn how to work as a team.

“From this game forward I’m hoping that the old Jubes can come back because we left the bar so high, it doesn’t make sense to be losing games right now because, literally, we did not lose a game in these Tuesday games. It’s a new thing for us and it’s not a good thing. We need to get back to where we were.”

Mpho Mokoena, Esselen coach and an umpire for the Jubilee-Sunnyside match, said it was a problem that most players in the internal league still could not adjust to the level of netball required in the league.

“We’re still playing high school level netball. Meanwhile, some players have actually played at regional and provincial levels, so that becomes an issue. We play at different levels based on where we come from – either from Gauteng east, north and central, where players play differently. So it’s problematic when I have to judge the high school level players against more equipped players.”

Game of the East Campers

Five minutes into the game, an attempt inside Sunnyside’s circle paid off for scoring machine, Lebo Mokwena. Jubilee’s Naledi Maubane netted one with a powerful angled shot, but their joy was short-lived when Sunnyside’s Khanya Zwelibanzi and Lebo Mokwena paired up for a cleverly executed goal.

The first quarter saw Sunnyside dominating with a 6-1 lead. Jubilee came back in the second and third quarter following a stern talk from the captain. Both teams were warned a number of times about stepping and crowding, which led to clumsy play by both sides.

The end of the third quarter saw Sunnyside leading 15-5. Jubilee rallied strongly after the break with some much-needed shooting by Maubane. But Jubilee could not maintain the intensity and scored only another three in the final stretch.

Sunnyside has won two out of its three league matches so far. Their captain, Musi Lidovho, applauded her team.

“The team performed really well. I think we are capable of far more, especially considering the fact that we don’t even have a coach. But otherwise, the team’s been gelling well and we hope we can keep with this winning streak.”