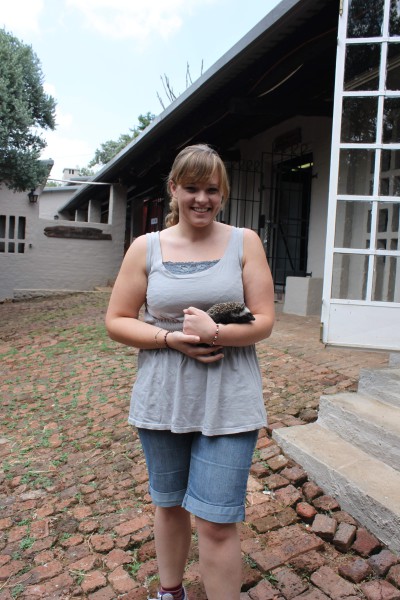 HAPPY HEDGEHOG: Jessica Artingstall poses for the camera with a hedgehog in hand. Photo: Supplied

It may seem an odd creature to want to count but Jessica Artingstall is on a mission to put a figure to the number of hedgehogs in South Africa.

The Wits Zoology masters student, has started an initiative to count and study the South African species of hedgehog.

Artingstall told Wits Vuvuzela that she decided to pursue research on southern African hedgehogs “because they are known to occur in many urban areas of Johannesburg.”

“They are quite frequently found in Midrand and Kyalami and the public can definitely help us greatly by reporting when and where they have seen a southern African hedgehog.”

The project started as Artingstall’s honours thesis which looked at hedgehogs across Johannesburg but it expanded to the whole of South Africa as she moved with the project into her master’s degree.

“With sightings apparently becoming less common, we are deeply concerned about this species’ future and where they are still occur in southern Africa,” she said.

Artingstall said it was her supervisor Prof Neville Pillay who had encouraged her take this topic on as her research project.

Together, Pillay and Artingstall run this project responding to sightings all across South Africa.

She explained the aim of the project is to determine where in South Africa hedgehogs are found in and how their distribution has changed over the last century.

The pair are also are assessing the local occurrence of hedgehogs in urban areas of Johannesburg and their encounter patterns with humans.

According to Artingstall hedgehogs move “rather quickly, for their body size” and they “have quite long legs and a tiny tail which very few people see”.

She joked that besides her supervisor Prof Pillay being nipped on one occasion, “hedgehogs are generally quite peaceful”.

Aringstall has encouraged the public across South Africa to send sightings to her at: ifoundahedgehog@gmail.com.

She asked that the date, location and details of the habitats of the hedgehog sightings be included when getting in touch.