The Wits branch of the National Education Health & Allied Workers’ Union (NEHAWU) is unhappy with the current leadership, according to regional chairperson, Lulamile Sibanda.

Sibanda was speaking at the branch congress in Senate House earlier today which was convened to elect new leaders but his sentiments were not echoed by the branch chairperson.

“The leadership has not optimally represented the members’ interests related to collective bargaining,” Sibanda said. Concerns raised by members included unhappiness with wages, being looked over for promotions and contractual issues.

The members who were in attendance though expressed their satisfaction with the current leadership and applauded loudly when “Prince”, the branch chairperson who refused to give his full name, spoke about how successful the union had been thus far this year. “Our members are happy, we are doing good things, they feel supported here at Wits,” he said. 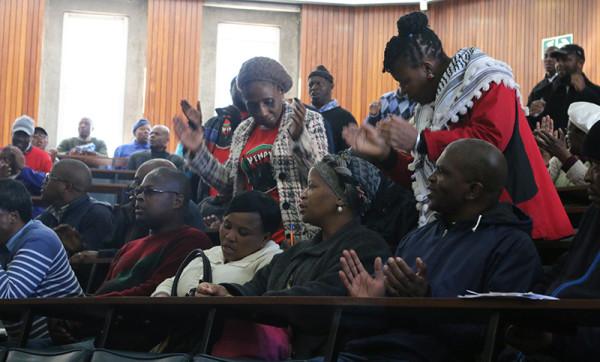 NEHAWU members singing and dancing at the start of the meeting on Wednesday afternoon. Photo: Roxanne Joseph

“Whether or not our members are really happy will de determined by the vote,” said Sibanda. “If they vote in the current leadership, then this will show faith in them, otherwise new leadership must take over and make things right.”

127 of the total 685 members of the branch attended the meeting but the number fell short of the 50 percent required to conduct the elections. The election has been postponed to next Tuesday, July 22.