Gavin on the hunt for a Clever cup 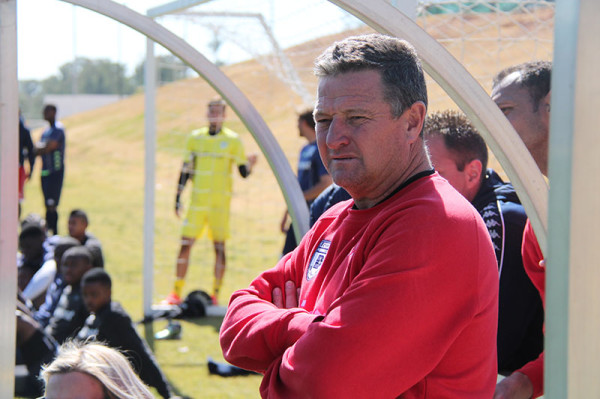 READY FOR ACTION: Bidvest Wits coach Gavin Hunt looks on as his team tackle Platinum Stars in a friendly match at Sturrock Park before the new season.

Wits attacking ace Sibusiso Vilakazi will be staying with the Clever Boys as coach Gavin Hunt looks to improve on last year’s season with more points and another cup final.

There has been speculation over Clever Boy Vilakazi, last year’s captain and PSL player of the season. Hunt told Wits Vuvuzela that Vilakazi would be at Wits this season unless something came up from overseas.

Hunt said Vilakazi did a great job last season as captain, however he was considering removing him from that leadership role.

“Maybe we need to free him up a little bit,” Hunt said.

Last season Bidvest Wits finished third in the Premier Soccer League (PSL), reached the final of the Nedbank Cup and qualified to play in Africa.

With many new players coming in Hunt said, “It’s all about me putting the jigsaw together this season but I don’t have to change too much because we did very well last season.”

Hunt has so far signed nine players, with five of them being over the age of 30. “I don’t see age, I see players’ ability. I think all players that we have signed still have legs on them, they have a lot of streetwise, a lot of know-how but we did have a little bit of imbalance with experience last year and I think that cost us the league,” he said.

With goalkeeper Dennis Onyango having returned to Sundowns and Jackson Mabokgwane likely to leave during the new season, Hunt told Wits Vuvuzela he has a bit of a problem in the goalkeeping department.

Rowen Fernandez looks set to make his return to Bidvest Wits this season, after being seen training during the week with the Clever Boys.Hunt would not officially confirm to Wits Vuvuzela that Fernandez was joining the team but said he could add a lot of experience and potentially help Bidvest Wits in the goalkeeping department.

With scoreless draws being a thorn in the Clever Boys’ side last season, Hunt said players such as Henrico Botes and Christopher Katongo coming in would do well this season with other players that can deliver the ball.

He added that the team’s set pieces were not good last season and he was looking to improve this aspect to score more goals.

With the Bidvest under-17 team recently reaching the finals of the Engen Cup, Hunt has signed two youth players from the academy.The duo consists of 15-year-old Liam Jordan and 20-year-old Julian De Freitas.

The Clever Boys’ first official game of the season will take place on August 1 at Bidvest Stadium in a quarter-final clash against Bloemfontein Celtic in the MTN8 competition.