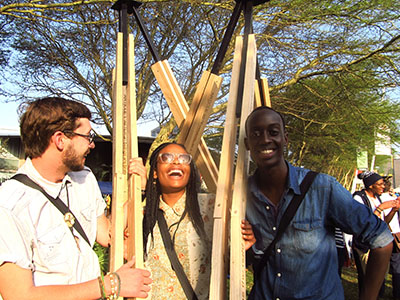 LADIES OF THE NIGHT SAFE: The trio of architects stand with their new invention at International Union of Architects in Durban in hope to save sex workers. Photo: Provided

THE WORLD’s oldest—and one of its most dangerous—profession might become safer thanks to a new invention by a trio of Wits students.

Third-year architectural students Lamy Subira, Yoliswa Dlamini and Andre-Juan le Sueur began working on the project in April this year as part of an assignment to improve the day-to-day activities of street traders.

“We spoke to the sex workers, we were really made aware of the safety issues. It was a natural step really, a really easy way to ensure safety,” said Subira.  The students created a wristband that would connect to a structure which Subira described as “street furniture” with a Wi-Fi router.

“We spoke to the sex workers, we were really made aware of the safety issues. It was a natural step really, a really easy way to ensure safety,” said Subira.

Sex workers will be able to clock-in at the start of their shift to an organisation with an existing database for sex workers. “It’s more than a device, we are architectural students after all. It’s an intervention,” said Subira.

The device would protect sex workers registered in the system in a “disguised way” where they would log in once they’re in the radius of the Wi-Fi network where the wristband can work. The wristband has four buttons where they can pick one of four options – on-line, offline, jump and panic.

‘On-line’ shows that the sex workers have clocked in their shift, ‘offline’ means that they have finished working, ‘jump’ means that they are with a client and ‘panic’ is when they are in a potentially dangerous situation.

Registration to the device includes the creation of login details which would alert the organisations once they are in the area of the Wi-Fi router.

“It’s an intervention, social and architectural that consists of a piece of street furniture which meets a security system and social awareness,” Subir said.

The device will improve the safety of sex workers who want to trade without worrying for their safety. The students agreed that “it was absolutely based on their immediate issues.

“Their safety is their primary concern but that stems from ranging issues. They face a lot of stigma that manifests in so many different ways; nurses refusing them healthcare, police brutalising them, the general public pushing them to the outskirts of society.”

“One thing we learnt is that not all sex workers in the trade chose to do such under difficult circumstances, they don’t always choose it under duress,” said Subir.

The students are currently presenting their device at the International Union of Architects in Durban.