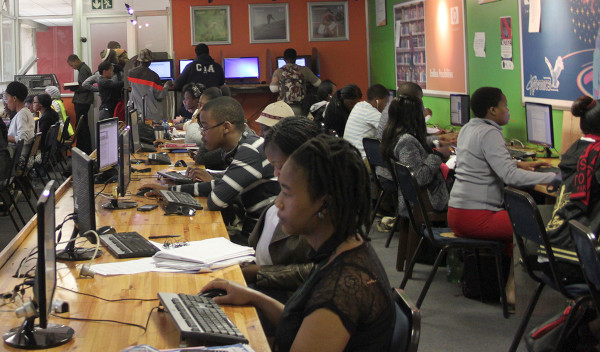 HEFTY PRICE: Witsies want to stay connected on campus and in residences by any means. Photo: Thabile Manala

“Hundreds of millions” is the price tag that it will cost Wits to install  a fully functional WiFi network connection at all campus residences.

In the last townhall meeting, students raised the lack of WiFi at residences as a concern. Vice-chancellor Prof Adam Habib said there are currently problems with financing the WiFi connection. He said the university needed “a hundred million [rand] extra over the next 12months to improve WiFi in residences”.

International House and Esselen residences have been partially upgraded, while plans for Wits Junction, Jubilee and other residences are still halted.

Xolani Hadebe, Director of CNS, said the major challenges were that WiFi is unstable, not just in residences but also on campus, and they are looking at alternative ways to replace it. He added that the kind of coverage that is needed is expensive because of the level of planning that is required.

While the Wits Junction residence connects to the internet through LAN, Hadebe said LAN costs more than WiFi and the strategy is to put in WiFi, because it would service more students.

Hadebe understands the frustrations of the students, “we all don’t like the situation we are in, we are working hard to create a stable connection.” He also added that Wits being the most prestigious university in Africa adds pressure to have world-class technology.

Nokuthula Khoza, who lives at Wits Junction, said: “We can’t access WiFi from our rooms, so we need to go to hotspots.”

Sarah Ifezulike, who also lives Wits Junction, commented on the price tag of  WiFi and said: “They could use the money to improve bus services and pay bus drivers a bit more, because I heard they don’t like what they are earning.”

Kesh Nuckchady, who lives at Knockando residence, said: “Internet has not been working since the beginning of the second semester”. He added that he had resorted to buying a modem which cost R2000 and he knows there are other students who can’t afford that added expense and so will keep struggling with connection.

“Why does it have to be a hundred million? It’s crazy! But if that’s what it takes then let it be because internet is how we learn at Wits via [resources like] E-learn,” said Elvis Mendu, who lives at Barnato Residence.