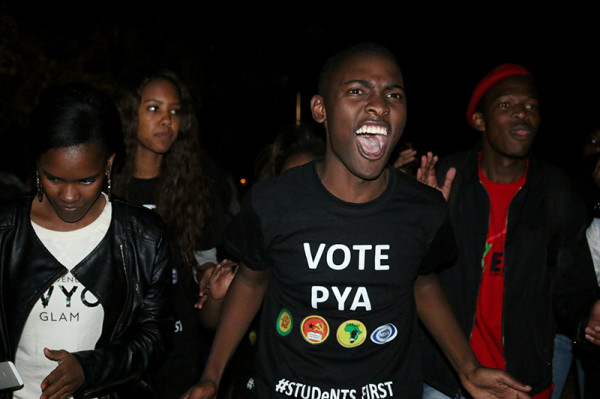 THE CRY: PYA candidate Nkululeko Nkosi strikes alongside  Project W and Wits EFF outside Mens Res while waiting for the leaders of the three parties to reach an agreement about the revised residence admission policy last night.                 Photo by: Lutho Mtongana

The Progressive Youth Alliance (PYA) and some of members of the Wits Economic Freedom Fighters (EFF) along with members of house committees and the SRC marched to the international affairs office this morning to demand a response from Wits Vice -chancellor, Prof Adam Habib about their concerns on a revised residence admissions policy.

Habib met the dozens of protestors to receive the memorandum that was jointly written last night by the PYA, Wits EFF, house committees and the current SRC.

The memoranda states: “We as concerned students, social leaders and student representatives say that the time is ripe to demand the university keep students interests at the forefront and not impose policies that will affect our lives adversely, without any consultation or vigorous engagement.”

“We told him that it is unacceptable that issues that relate to students are not properly discussed and debated with students before an actual policy is taken into consideration of being drafted”, said PYA candidate Shaeera Kalla.

Habib told the students that he would meet them to offer his response to the memorandum later in the day. The meeting will be held at Mens Residence common room at 2:30 pm.

Competing candidates and organisations for this year’s SRC (Students Representatives Council), elections race were united last night in a bid to challenge the Wits University revised residence admissions policy which aims for a more cosmopolitan university at the expense of disadvantaged students.

The Progressive Youth Alliance (PYA), Project W, and the Wits Economic Freedom Fighters (EFF), along with the house committee and the current SRC , will occupy the international affairs boardroom from 9am today to challenge the recommendations of the policy, according to outgoing SRC President Shaffee Verachia.

Verachia said the group will draft a memorandum and hand it over to Wits Vice Chancellor, Prof Adam Habib.

The revised residence admission policy, which Habib referred to at a recent townhall meeting, states: “for new first-year undergraduates to make campus accommodation more accessible and appealing to all students, especially those who have a good academic record”. In addition, the policy states that: “[It] will ensure a diverse and cosmopolitan residence environment in which everyone can feel at home and can succeed academically.”

According to Mens Residence chairperson, and PYA candidate, Keoagile Matseke: “Some of the recommendations outlined in the document, we felt that were disadvantaging certain students. We felt that the management tries to achieve the cosmopolitan agenda at the expense of other students.”

At last night’s meeting, Verachia announced that: “ All three structures (PYA, Project W and Wits EFF) further accept that there may be a call to boycott SRC elections if tomorrow our voices fall on deaf ears.”

Speaking to Wits Vuvuzela after the meeting, Project W’s Jamie Mighti said while his organisation agrees with the rejection of the policy, they disagree with the manner in which the issue is being addressed.

He added, “We are united around student issues, when they are genuine, this is a genuine student issue but we don’t think the way it’s being articulated is genuine. There’s a process before we follow these things. We can’t make a hasty decision as an organisation.”