Wits SRC on the edge 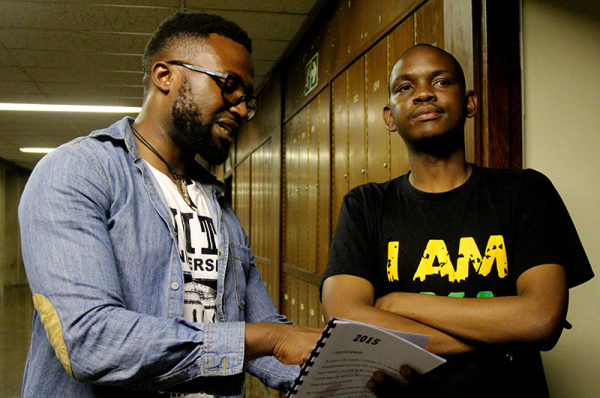 by Ilanit Chernick and Nqobile Dludla

The abrupt end of the new SRC’s first meeting, which climaxed with a dramatic walkout by Project W who accused the Progressive Youth Alliance (PYA) of being “illegitimate and undemocratic”, followed a week of behind-the-scenes battles over positions on the new council.

Project W walked out during the vote for new portfolios, which they said were decided without their input by the PYA—who have a majority of the seats on the new SRC.

The vote carried on with PYA member Mcebo Dlamini being elected as the new SRC president.

However, while the PYA presented a united front at the SRC meeting, the decision to select Dlamini and other SRC executive committee members was far from unanimous.

“There are also older comrades in the PYA who influence the decisions on the presidential candidate and the executive committee. The process is increasingly frustrating,”

Wits Vuvuzela spoke to leaders in the PYA, who confirmed the alliance struggled to make a decision on who should be elected to the important executive positions. All the PYA leaders requested anonymity because they were not authorised to speak on internal alliance politics.

According to one PYA leader, there was a struggle to decide between three presidential choices, Dlamini, Amogelang  Manganyi, and Senzekahle Mbokazi with disagreement over their different levels of experience and ability to carry out their duties.

Some PYA members believed Dlamini was the strongest candidate because of his position as Wits Junction chair despite a controversy earlier this year over his false claim to be a member of the prestigious Sisulu family.

“People want Mcebo despite controversies surrounding him in the Sisulu question,” the PYA leader said.

According to this PYA leader, Mangayani’s suitability as a SRC president was questioned because he is currently a fifth-year medical student and would face time constraints next year that would affect his ability to meet presidential duties.

This process of selecting executive members of the SRC was made more complicated by senior PYA leaders outside the current SRC attempting to influence the selection of positions.

“There are also older comrades in the PYA who influence the decisions on the presidential candidate and the executive committee. The process is increasingly frustrating,” the PYA leader said. He declined to name the senior PYA members involved.

However, a second PYA leader interviewed by Wits Vuvuzela denied that lobby groups within the alliance had been allowed to form.

“The PYA don’t squabble,” the second PYA leader said, “We meet as a collective. Those members with experience try to advise or give opinions when choosing candidates for exec or president but things change all the time.”

However, this PYA leader admitted the alliance had little control groups and friends within the PYA who form “behind closed doors” and who have decided on backing their own candidates.

“But we call all members of the PYA together to decide who should be presidential candidate. We decide and solve these issues together,” the PYA leader said.

The politicking within the PYA ended with Wednesday’s meeting and the walkout by Project W.

Wits Vuvuzela had initially been denied access to the portfolio meeting. However, after a short conference between Project W’s Jamie Mighti and outgoing SRC president Shafee Verachia she was allowed in “as a student” so long as she put away her camera and voice recorder.

The meeting was held in Senate House and chaired by Verachia. It was attended by 14 of the 15 newly elected SRC members. Also in attendance were representatives from other Wits student councils and three members of the current SRC.

The meeting first voted for the executive positions, including president, with PYA members taking the top five slots with little protest from Project W.

“What do they expect me to do, teach yoga?”

However, 20 minutes into the meeting an argument erupted during a debate over portfolios. Both the PYA and Project W had proposed new portfolios for the SRC and motivated for them during the meeting.

Verachia then moved to have a vote on the portfolios, however Mighti objected saying there should be an open debate over the proposed portfolios before the vote.

Verachia responded that both organisations had already motivated for the proposed portfolios and further debate was not needed.

After another brief exchange between the participants, Verachia again moved for a vote resulting in the Project W members gathering their belongings and walking out of the meeting.

“We walked out because it was an illegitimate forum. They are not allowed to dictate positions to us, and this was an unjust abuse of power,” Mighti said.

Verachia adjourned the meeting after the walkout and Mgudlwa successfully attempted to convince the Project W members to return to the meeting.  Verachia then cited SRC rules governing meetings and reconvened the meeting with the remaining SRC members.

“The PYA have chosen to dictate positions to us instead. Positions which we will not agree too because they are redundant white elephants which is a betrayal to students’ needs,” Mighti said.

Mighti, who was made the Campus Wellness officer, said his position was redundant because there were already university structures to help student health.

“What do they expect me to do, teach yoga?” he asked.

Mighti said they would lay a complaint about the meeting with university authorities. Failing that, they would seek an interdict at the South Gauteng High Court to overturn the outcome of the meeting.

Vice-chancellor Prof Adam Habib said he was “gathering information” about the situation.

Verachia said the PYA were preparing a statement in response to Project W’s walkout and subsequent accusations. However, it had not been sent to Wits Vuvuzela as of our print deadline.