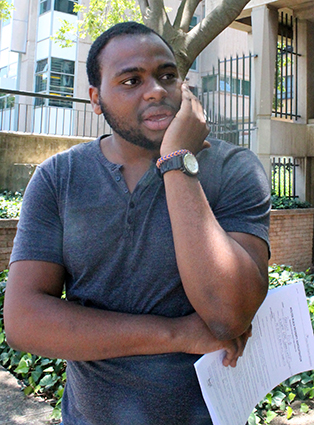 SHOCKED: Wits masters student, Bandile Ngidi gets emotional as he explains how he tried to help the dying woman. Photo: Ilanit Chernick

A 27-year-old female, the first in her family to go to university, died this morning outside Wits Campus while on her way to register.

According to witnesses Nokuthela Nxumalo from Thokoza, South of Johannesburg, collapsed on Jorissen street after getting off a taxi at around 8.30am.

“She fell on her face in the road. She fainted,” said Masters student Bandile Ngidi.

“She wasn’t conscious but she was breathing heavily. I ran to help her,” Ngidi said.

Security guard Solani Thozi ran with Ngidi to try carry the collapsed woman off the road.

“We carried her onto the pavement and lay her down. I called for one of my colleagues to help us,” he said.

A shocked Thozi called Campus Control who sent a medic to administer first aid and the medic called Netcare 911.

“The ambulance came just after 9am but she had already stopped breathing. Paramedics tried to help her but she was already with God.” 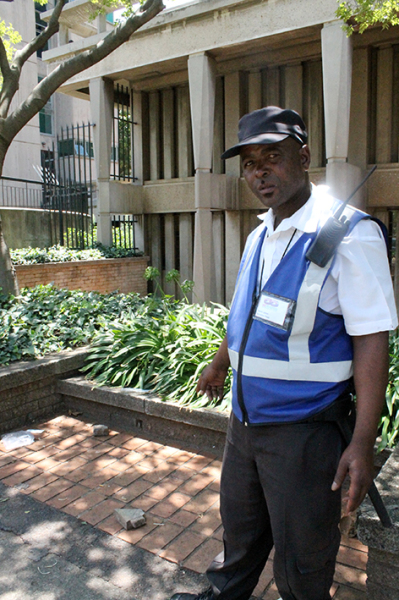 Police arrived on scene and found a pocket book inside her bag. They found a contact number and were able to notify her father.

Thozi said police had only come to removed the body after 12pm.

Thozi said when her father arrived he said she had been unwell the day before and had gone to the hospital. Thozi said Nxumalo’s father told police both he and his wife were unemployed and she was their first child to go to university.

“We tried to help but there was nothing we could do. Only God knows when it is our time to go,” Thozi said.