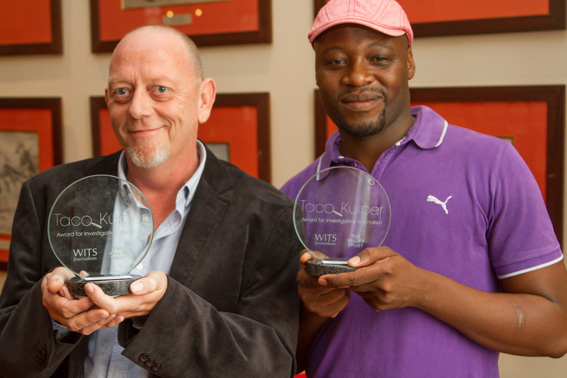 This article originally appeared on journalism.co.za

The story, which revealed how members of teachers union South African Democratic Teachers Union (SADTU) were selling and buying posts at South Africa’s public schools, was honoured with the top prize of R200 000 at Johannesburg’s Rand Club on Friday.

“I’m particularly stoked, it’s my fourth year of entering and I made the top ten for the first three years and left with lunch only, so this wicked,” said Harper.

Masondo said he and Harper spent over a year investigating the story and resisted attempts by SADTU to prevent them from publishing the story. “SADTU is a very powerful union and have tried in every possible way to bully us into stopping the story and we just kept going and it paid off,” said Masondo.

City Press editor Ferial Haffajee said she was proud of her team and described this story as particularly important. “This one explains a lot about our country and why despite the fact that they spend so many billions on education we don’t see the outcome. I was very keen on the story and it’s lovely it got recognised.”

Acclaimed journalist and member of the judging panel, Justice Malala said there were a number of good and important stories to choose from but the City Press entry stood because “this stuff is happening all over South Africa.” “It just was a fantastic ambitious, impactful piece of journalism. Look it had great competition, but this story has big, big impact,” said Malala.

Freelance journalist Sean Christie received a special award for his entry “Under the Nelson Mandela Boulevard” which convenor of the judging panel, Professor Anton Harber described as a “memorial piece of narrative journalism”.

The Taco Kuiper awards is now in its 9th year and received 58 entries this year, a record for the awards and a significant improvement on the 35 received last year.