Witsies say ‘no!’ to xenophobia 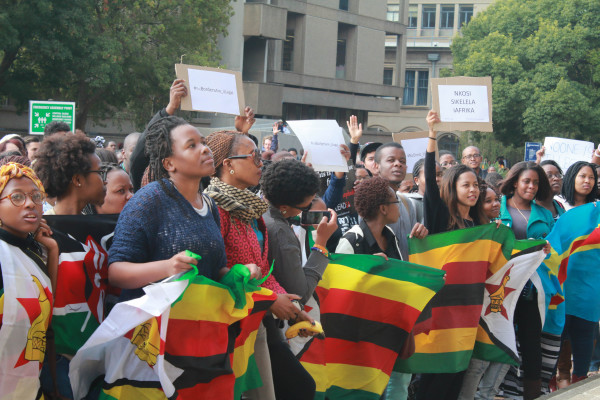 That was the message from more than a 1 000 Witsies on Wednesday, a huge show of support by Wits staff and students for an anti-xenophobia march that was called on short notice.

The Witsies marched from International House to the steps of the Great Hall, carrying flags from African countries and placards with the words “Nkosi sikelela iAfrika”, “Africa unite”, and “No one is illegal”

“From Cape to Cairo

The message was clear “No to xenophobia!”.

Afikile Qobo, 4th year Medicine, said South Africa have come so far as the country and should share with people who have helped the country in the past.

“I am here because I want action to the words that have been going on social media,” she said.

“The bright minds have spoken, not in our name, Wits intellectuals have made a broad statement today that there is one Africa and it belongs to all of us,” Dlamini said.

For Mildred Airo, the chairperson of the East African Student Society, the message that Witsies needed to take home after the march was that “violence is not the answer”.

“Tell your brother and sister to stop violence,” said Airo.

At the rally at the Great Hall, Witsies listened to the story of Elvis Munatswa, a Wits student who was physically attacked recently inside the taxi on his way home from Wits by four men including the driver.

“I stand here well, attending a few session for physiotherapy just to get my leg on track,” he said. “But I am sceptical of using a taxi.”

Munutshawa said the march “reflected a positive side” of South Africa “I haven’t seen in recent weeks.”

Ayofunde Awosusi, the president of West African Student Society at Wits, agreed that the march showed South Africa’s good side.

“From the foreign student perspective it gives us hope,” he said. “Even though it doesn’t make us feel safe or better but it has the general vibe of what South Africa is about.”

Mark Heywood, director of Section 27, apologised on behalf of all South Africans for the brutality of the xenophobic violence and urged Witsies to continue fighting against the injustices.

“Today we do not stand the heart of South Africa and the African continent.”

Wits students were led by Vice Chancellor Prof Adam Habib and the SRC, who organised the march. Giving his speech, Habib chanted “Mayibuye iAfrika” and “Amandla awethu” (Power to the people).

“I want you to say it louder so that the whole South Africa can hear,” he shouted.

Habib described the past two weeks for South Africa as “shameful” but on Wednesday he expressed his pride because Wits stood together and said “not in our name”.

Habib thanked students for speaking against xenophobia, “Thank you for coming, you have lifted my heart and I think you lift the heart of everyone in the world.”

“Today we do not stand here in front of this Great Hall as Wits University but we stand here as the heart of South Africa and the African continent.”