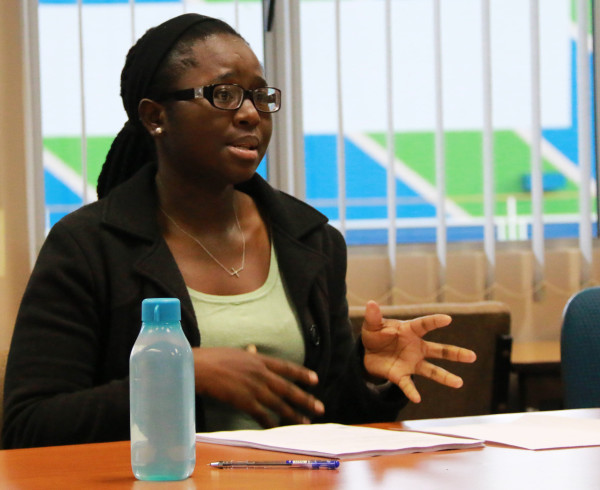 According to Nomonde Nyembe, CTRG key speaker, the purpose of the talk was to dissect and critique mainstream feminism, primarily looking at the exclusion of women of colour in the feminism dialogue.

On the agenda was a critique of Sojourner Truth’s Ain’t I Woman speech, Kimberle Crenshaw’s Mapping the Margins article and Angela Harris’ Race and Essentialism.

The speech was a precursor to the discussion about Angela Harris’ Essentialism article.

Three generational waves of feminism were discussed in detail.

Fourth year LLB student, Anele Nzimande pointed out that there is a regular monitoring body that supresses your blackness as a woman of colour.

“I have heard the sentiment from many black feminists saying that the initial wave of feminism did not view black women as women, so by that very idea, it excluded them because they were not viewed as women in the first place” she said.

The conversation shifted to the subject of marginalisation, and the argument of who is more vulnerable to this notion.

“Black women are doubly squandered on the grounds of race and gender.”

Mbe Mbhele, a fourth year Law student said: “I am very reluctant on speaking on politics of feminism[sic], I do understand that experience of women is different from men. I posit that we all remain black in the bigger scheme of things.”

This sparked a discussion from the women in the room.  Nzimande asserted that “There is a failure to recognise that black women are doubly squandered on the grounds of race and gender.”

On the topic of essentialism, PhD Constitutional Law student Sanele Sibanda closed the conversation by criticising the liberal position of feminist legal theory.

“The issue is about the effect of putting across one voice, a univocal theory. Putting this one voice has a tendency to universalise the female experience.” he said.

He states that universalising the female experience is a silencing effect because dominant voices seek to speak for those who are marginalised.

“So you end up with this idea that being a woman can be reduced to an essence and all the different experiences of differently situated women can be captured in this essence,” he said.

The CTRG members hold weekly meetings to discuss and critique thought provoking materials that will stimulate intellectual conversations among Wits students. Those who want to awaken and sharpen their critical abilities are encouraged to join and participate in the next discussion.

The next meeting is about Queer Theory and will take place on  May 4 at the Centre for Applied Legal Studies (CALS) Seminar Room at West Campus.